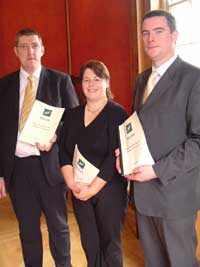 Evidence suggests that the continued existence of Health Service prescription charges in the Six Counties constitutes a financial barrier to receiving treatment for a proportion of the population and that this has a detrimental effect on their health. The campaign aims to remove financial barriers and put an end to a system which financially penalises people for being ill.

The launch of the Sinn Féin campaign last Monday was attended by representatives of various organisations including the British Medical Association, Royal College of Nursing, Chartered Society of Physiotherapy, the MS Society, Diabetes UK, Belfast Carers' Centre, Asthma UK, The Dry Arch Centre for Families Dungiven, and the Community Development and Health Network.

Sinn Féin MLA John O'Dowd speaking at the launch of the Sinn Féin campaign said: "Sinn Féin, within a new Six County Executive and in keeping with our belief that all health services, including access to prescription medication, should be free at the point of delivery, will seek to introduce enabling legislation which will abolish all Health Service prescription charges.

"However, we recognise that those who are ill cannot afford to wait while anti-Agreement unionists delay the restoration of the Assembly and Executive. Sinn Féin councillors across the Six Counties will be introducing motions to their respective councils calling on direct-rule minister Shaun Woodward to adopt the approach taken by his colleagues in Wales and to commence the phasing out of prescription charges. As a first step in such a process, we are advocating a full review of the medical conditions which are included in the present system of exemptions with a view to ensuring that all chronic conditions should be covered", he said.