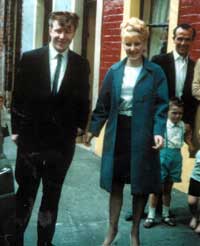 PHILIP McGUIGAN North Antrim MLA, asks how we attend to the needs of all victims of the recent conflict for acknowledgement, truth, justice and healing.

Ardoyne is a small nationalist enclave in North Belfast with a population of 7,000- roughly the same as that of towns like Wicklow, Dungarvan, Longford, Monaghan, Nenagh or Castlebar. Between 1969 and 1998, 99 people from the area were killed. This was ten times the average for the Six Counties, higher than any other electoral ward in the North.

In this one small area fifty people were murdered by the various unionist paramilitaries who had been organised, armed and directed by British state agencies to carry out their dirty war. Another 26 were killed directly by British forces- soldiers and police and, for these, not a single person was ever arrested, charged or convicted.

Nine of the first ten people killed in the North in 1969, the year many regard as the start of the conflict, were killed by the RUC. Two were from Ardoyne. The first was 27-year-old busman Sammy McLarnon who had two children and whose wife Ann was expecting their third. He was in his home when the RUC shot him dead. A few hours later Michael Lynch, a 29-year-old who was returning from the cinema was also killed. The RUC shot and injured another ten men in Ardoyne that same night.

The vast majority of killings by state forces in the Six Counties always followed a pattern.

As peace takes root, republicans are reflecting on how to contribute towards healing the wounds and the pain borne by countless thousands of people who lost loved ones. Having long supported the notion that there should be no hierarchy of victims, it is our contention that the grief of a British soldier's mother is no greater or no less than that of the mother of an IRA volunteer. The question for us all then is how do we attend to the needs of all victims for acknowledgement, truth, justice and healing?

While it is true that no-one has a monopoly on suffering, victims of state violence have had to endure the additional pain of official denial and cover-up. The murder of Sammy McLarnon, for example, was never investigated or even categorised as a crime. At the time of his killing, the local RUC chief said that he had probably been shot by the IRA and that they, the police, would never do such a thing. This was carried in the media despite the fact that the bullet which killed him was standard issue RUC calibre and that numerous witnesses had attested to the fact that the RUC had been firing towards the McLarnon home.

Ann McLarnon to this day, has never received an explanation, much less an apology from the RUC/PSNI about the killing of her husband. In fact they didn't even take a statement from her even though she was standing beside her husband when he was shot. This is typical of the experience of most of the 1,500 nationalists killed by British state and semi-state forces. Canadian Judge, Peter Cory, identified the stark difference in attitude adopted by British state agencies towards those who were killed or about to be killed by unionists, as opposed to those against whom there was any hint of a threat emanating from republicans.

Attempts to brush over state violence are not confined to official organs of the state. Some years ago, the Ulster Folk and Transport Museum organised an exhibition dealing with victims of the conflict. Sammy McLarnon's son Sam, who had been involved in a number of cross community projects, was asked to contribute something about the death of his father. He wrote a piece which stated 'My father was shot dead in the house by the police when I was two-and-half years of age'. After initially putting it on display, the museum withdrew the piece at the request of the RUC on the grounds that "no one had ever been murdered in their home by the police". When the family protested and the issue was publicised, the museum eventually replaced the exhibit.

Officially, the families of people killed by the state are invisible. The state wants to pretend they don't exist. This was seen at its most blatant in the Bloomfield Report which was commissioned as part of the Good Friday Agreement to examine issues relating to victims and the legacy of the conflict. In an 82-page report only two paragraphs were given to victims of state.

Victims of state violence should not have to fight for recognition. Like everyone else bereaved through the conflict, they are entitled to full acknowledgement of their pain and loss. The British state actively participated in the conflict. Throughout the 35 years of its war, it planned and executed hundreds of killings. There is a political and moral responsibility on the British Government to deal with these issues, to deal with the past and to tell the truth. They owe this to victims, their families and to society as a whole. The struggle to ensure this happens has to be part of our contribution to the broader truth issue.