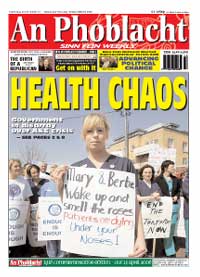 Government in disarray over A&E crisis

Sinn Féin has said that the Fianna Fáil/PD government is in complete disarray over the Accident and Emergency crisis in the 26 Counties.

Tánaiste Mary Harney declared this week that the situation in A&E units constituted a national emergency. But Sinn Féin Dáil leader and spokesperson on Health and Children Caoimhghin Ó Caoláin TD said the Government's ability to respond was being thwarted by the Tánaiste's health privatisation agenda.

Commenting after he challenged the Taoiseach on the crisis at Leaders' Questions in the Dáil on Wednesday, Ó Caoláin pointed out that the Government could already have provided an additional 1,000 acute hospital beds in the public system with the money wasted on the failed PPARS and FISP computer systems and on tax breaks for developers of private hospitals.

"When I challenged the Taoiseach on the way the A&E crisis is being compounded by the two-tier public-private health system, he referred to the ongoing talks on a new contract for hospital consultants. We all want to see a new contract that obliges consultants to work in a fully accountable way in the public system and to ensure all new consultant posts are public only. But what credibility has this Government in those talks when it is pouring public money into the private health system, thus subsidising the private practices of consultants whom the Government claims it wants to work in the public system only?", Ó Caoláin said.

"We have had hundreds of people every day waiting for many hours and often for days on trolleys in A&E since the Tánaiste's appointment as Minister for Health - an average of 300 per day so far this year. We had the same under her predecessor Mícheál Martin. We have had this crisis since the Government took office - not in 2002 but in 1997", he said.

"The Government's own Health Strategy in 2001 stated that at least 3000 additional acute hospital beds are needed in our hospitals and this is essential to address the A&E crisis. Yet this Government is pouring public money into the private health business instead of using public money to provide public beds.

"It is obscene that consultants are competing to buy private suites at a cost of €1 million each in one of the Tánaiste's new private hospitals here in Dublin. These have been funded with tax breaks from this Government.

"The money spent on tax breaks for developers of private hospitals, together with the money wasted on the HSE's failed computer systems, would already have provided an additional 1,000 acute hospital beds in the public system", the Cavan/Monaghan TD said.

Ó Caoláin also raised with the Taoiseach the newly published Report of the Nenagh Hospital Action Group which clearly demonstrates the viability of smaller hospitals in dealing with emergencies. He stated: "Nenagh Hospital in County Tipperary was targeted by the Hanly Report to have its A&E unit closed. The Fianna Fáil party kicked up a row and the cut was not made. Their party colleagues failed to save the A&E unit in Monaghan General Hospital in the same way and it remains closed, something that has led to the loss of lives.

"As an additional measure to address the A&E crisis the Government should move to reopen A&E units in smaller hospitals that have been closed. They should act on the basis of the Nenagh report and develop our smaller hospitals to their full potential, with emergency departments, acute beds and full co-operation with GPs and the primary care system."