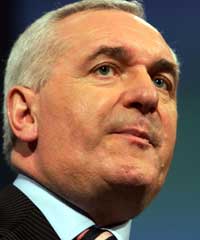 The Dublin government has implicitly supported a new generation of nuclear power stations in Europe. German officials attending last weekend's EU summit in Brussels disclosed details of secret talks at which only Austria and Germany explicitly rejected the nuclear option.

Publicly the 25 member states supported the creation of a new common EU energy policy called the Energy Policy for Europe (EPE). Privately it has been claimed that the majority of EU leaders backed a revival of nuclear power station construction in Europe.

Finland is set to build Europe's first new nuclear reactor in over 20 years, despite a recent Euro barometer poll showing that only 12% of EU citizens support nuclear power as a solution to importing oil and gas.

Earlier this month EU energy commissioner Andris Piebalgs published a green paper on energy policy for the 25 member states. While supporting the nuclear option, he said that it was not the "silver bullet" for tackling Europe's growing energy needs. The EU is increasingly dependent on imported oil and gas, mostly from Russia to meet growing energy needs. By 2030 the EU will be importing 70% of its energy requirements

An Phoblacht contacted the Irish department of foreign affairs to ask them about the summit conclusions and the alleged support of nuclear power. Even though this was a European meeting, the press office directed enquiries to the Department of An Taoiseach as Bertie Ahern was attending the summit with Foreign Minister Dermot Ahern and Finance Minister Brian Cowen.

The Government Press Office didn't have any details on the meeting, but did say that it was "our national policy to reject nuclear power in Ireland" but that we also "respected the sovereignty of other EU member states" to formulate their own policies on nuclear power.

When asked if the Government had agreed with the broad thrust of an argument that there was a case for other EU states to build new nuclear power stations, the spokesperson told An Phoblacht that he didn't "have chapter and verse on the meeting".

Nuclear issues are technically the domain of the Department of the Environment. A spokesperson there told An Phoblacht that he didn't have a lot of information as his Minister wasn't at the summit. He did say that, on the question of other states building nuclear plants, "we wouldn't approve of it", but would want it done in the "most transparent way".