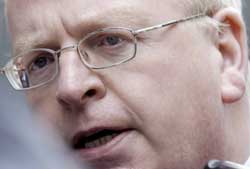 Well, it was an earth-shattering event: Michael McDowell apologising for intemperate language; and the media relished the chance to bask in this public criticism, though emphasising the "voluntary" nature of McDowell's contrition.

And the same Fine Gael and Labour parties that deplored McDowell's comments on Richard Bruton are quite happy to applaud the equally baseless attacks he makes on republicans, caring not one jot for their impact on the peace process or their role in encouraging the DUP and other unionists in their rejectionism.

And the very same media that tut-tutted over McDowell's comparison of Richard Bruton with Nazi propagandist Joseph Goebbels remained (and remain) silent about his outrageous linking of the Greens' John Gormley with those who attacked the PD headquarters on the day of Dublin's infamous Orange march riot.

McDowell then declared in the Dáil that those who attacked the PD building were "John Gormley's type of people", and when pressed to withdraw the slur arrogantly refused, declaring that "there was muesli in the air and open-toed sandals on the streets."

The media reported that McDowell slept badly after his attack on Richard Bruton, but apparently had no qualms about linking Gormley with criminal activity - and neither did the media, who have consistently ignored it and have relished the admittedly colourful abuse the hectoring minister gave out.

But there is a serious point that the media have overlooked. Is it really appropriate for a Government minister to shout down serious criticism by abuse instead of arguing his case in a professional manner?

The point is, of course, that the media encourage McDowell's bullying intimidation: his only mistake was that Richard Bruton is part of the establishment, and the unwritten rule is that abuse should be reserved for those outside the loop. Bold boy, Michael!

Talking of being outside the loop, that was a fine house which RTE television repeatedly displayed as Tom Murphy's abode, accompanying yet another lurid story alleging criminal activity on the part of the people of South Armagh in general, and republicans in particular.

What a pity that the house wasn't Tom Murphy's at all. Not that you would know that from RTÉ, who refused to clarify the issue, preferring to let the image be broadcast unchallenged by facts or honesty.

Not to be beaten in the Get Down Low stakes, of course, was The Sun. This rag reported the finding of a "torture chamber" no less. Where? Why, convenient to the home of Tom Murphy.

But was this convenient to Tom Murphy's real home, or convenient to the home shown on RTÉ, or was it just a convenient figment of the bitter imagination of bought-and-paid-for journalists who will write any lie to pander to the needs of their British masters?

Meanwhile, don't expect any charges. This whole sorry episode was just a photo opportunity, part of the general campaign to suggest that the republican demand for Irish freedom and independence is really something unsavoury.

In fact, the only unsavoury thing is the media who publish such lies and the journalists who write them.

The journalists who write for rags like The Sun and The Star are often to be heard loudly defending "freedom of the press", that is, their right to publish whatever they want. This is a cardinal principle of democracy, we are told.

The problem is that the press itself isn't free. It is owned by rich businessmen, like Tony O'Reilly (Sir Anthony, no less, to his British friends) and Rupert Murdoch. Their aim is not to encourage public debate of public issues, with a full evaluation of all points of view and an objective presentation of facts. Their aim is to use their papers to promote their own political interests, and to do so without any regard whatever for facts or objectivity or standards of decent comment.

The newly appointed editor of The Irish Independent, Gerry O'Regan has openly boasted that his job is to create and sell a commodity, not to research and publish news.

He doesn't like political debate, and certainly doesn't like the idea of allowing all shades of opinion to be heard.

Yet this gang are not held up as the threat to "freedom of the press"; that dubious honour is reserved for republicans, socialists, environmentalists, feminists and others who want to challenge the status quo with real debate.