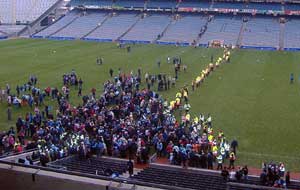 Last Sunday Fermanagh beat Dublin. To the best of my recollection, and that of any of the other sad people who would know these things, it is the first time that Dublin have been beaten by Fermanagh in senior football. Or maybe in anything other than drinking vodkas and red bull, or driving at high speed on the wrong side of the road. Denise.

Anyway I didn't go to see it so I really don't have to talk about it. I was playing hurling and we won. Someone said I reminded them of a young DJ, D.J Curtin, veteran star of the showband scene, that is. I sing like D.J Carey and play hurling like D.J Curtin.

St. Patrick's Day brought back memories of cold days of years back when freezing to death in Croke Park at the Railway Cup finals was regarded as a patriotic duty, and possibly a way of getting out of purgatory a few millennia before your release date. Now it hosts the staging of the All Ireland Club finals.

Croke Park has changed beyond recognition but some things remain the same. It was still bitterly cold and prey to a wind that seems to attack you from every angle. The only difference now is that if you are fortunate enough to be in the Premier Section you can escape to the bar and peer at proceedings through the glass. Which of course, as True Gaels, we did no such thing. Okay, we might have for a while.

Which reminds me of one of the most bizarre scenes I have ever witnessed at Croker. It was at the qualifier in 2002 between Tyrone and Sligo which Sligo won. Sligo won that one. Tyrone were beaten. Anyway, returning from performing my toilette, I ran into a group of about five chaps from Tyrone who were standing staring up at the match on a small television in the corner, nursing pints. The same match that they could have seen in the flesh if they had but ventured outside the door into the seating area.

But perhaps I am being unkind. Perhaps they were the Ballygawley Alcoholics Vertigo Sufferers Support Group. Ascending in the lift was psychological capital. Ordering the pints was a little step backward but, hey, they were doing their best.

You would probably have needed to be emotionally involved in either of the club finals to have sat happily through the Arctic conditions on Paddy's Day, especially with the warmth and comfort of the bar close at hand. I did, however, see the whole of the hurling between Portumna and Newtownshandrum and it was well worth the loss of several remote digits to the thermo frost.

The Galwaymen had come to the final with a more impressive haul of scalps under their belt and they franked that form with a powerful display. Whatever they are putting in the water over there these days, it is producing some fine teams and I know several shrewd punters who have been examining the odds for the McCarthy Cup.

We already knew of the Canning and Hayes brothers and Michael Ryan was brilliant at centre half back, but there were others who shone who would not be familiar names. But then any team trained by a Treacy has to be good!

Newtown over the past ten years have set the standard for the small club, especially in the context of the Cork hurling tradition that would have you believe that lads from the west of the county would be better off using their sticks to hammer nails. They had struggled against Ballygalget in the semi-finals although it was said that several of the team were suffering from flu at the time.

I doubt that was an excuse last week and they were always second best to Portumna. The O'Connor brothers did not shine and once that star was dimmed they were always going to face an uphill struggle against a team that was well drilled and possesses many fine and skilful players.

The football was disappointing in contrast and once again begged the question as to why the hurling was played first. Salthill-Knocknacarra won't have worried about that, however, and they overcame St. Galls with probably a bit more in hand than was reflected in the scoreline. The wind played a big part and the Belfastmen performed well against it in the first half. To the extent, indeed, that the consensus among most people seemed to be that they would dominate proceedings after the break.

It was not to be. It is easy for those of us watching from the side to say of course, but it did appear that Galls lost the plot to some degree. They stopped doing the things they are good at - the short-passing and running off the ball that had won them the All Ireland Sevens and gotten them to the final in the first place - and were perhaps tempted by the strong wind at their backs to resort to the long, speculative ball. It didn't work although they might have argued the toss with regard to the goal that was disallowed.

Despite the weather then, it was a satisfying conclusion to the club championships at Senior, Intermediate and Junior levels. Clubs around the country will now be dreaming of county and perhaps bigger success over the coming few months. Few, indeed, being the operative word given the increasingly restricted club season in many counties.

There will be a hectic round of league and championship games, but for some that will come to an end as soon as the inter-county provincial championships begin in May and the club competitions are put on ice until the county team exits, which with the qualifier system can mean a virtual suspension of club competition for the whole of the summer. If, as the leadership of the association claims, the club remains the apple of its eye, then something needs to be done to address this.