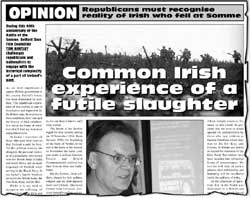 Just one example, please, of an eccentric Irish soldier combating the union by joining the British Army. Please exclude then IRA Volunteer Séan Garland in 1956, ordered to enlist to help the IRA steal weapons, and those Fenians who attempted to subvert the British Army from within by promoting the Fenian oath.

John Remond's fight to "free small nations" in a British uniform was a sham. It was promoted by Redmondites hankering after a piece of the British Empire.

What exactly is it that Tom wants to commemorate? And why stop at World War One? Why not commemorate the Irish who fought to defend slavery in the American Civil War? What about those who defended far flung parts of Britain's empire by putting down native revolt? Why not commemorate those Irish in British uniform who put down the natives in Dublin in 1916? While at it, let us take the militarism out of it and put a humane face on British barbarity. What could be more agreeable to British militarists and their political masters?

The first excuse given by the British and US governments for the disastrous invasion of Iraq was that Iraq had horrendous weapons including chemical and nuclear devices. But the only chemical weapon used was white phosphorous fired into the city of Falujah by US forces and the only nuclear related ones were Depleted Uranium munitions used widely by invasion forces.

The next excuse was that Saddam was harbouring al Qaeda in Iraq. In fact Saddam, a secularist, repressed Islamic fundamentalists. Now, three years after the invasion, Iraq is full of al Qaeda linked insurgents, both foreign and home grown.

The latest pretext is the spreading of democracy to the Middle East. Now that the Palestinian people have voted for Hamas, have been driven to extreme politics by the brutal Israeli occupation, the US and British governments refuse to recognize the elected government. But they ally themselves with dictatorships in Pakistan, Saudi Arabia, Kuwait and Uzbekistan. And they claim to be surprised at the level of the Iraqi uprising!

Finally, it has taken the demotion of the US Army Head of Contracts, for complaining about corruption, to reveal the real beneficiaries of the war. It seems that $50 billion of Iraqi assets were trousered by US companies with strong connections to the Bush administration. Chief among these was Haliburton in which US VP Dick Cheney holds millions of dollars in shares. Many of the contracts were not delivered or grossly overpriced or both. In one case a $15 million contract for a building was awarded to a US company but they were unable to deliver. They subbed it to an Iraqi company for a mere $18,000 and ripped off the rest. Where is Eddie Hobbs when he is needed?

This week marks the third anniversary of the US led invasion of Iraq. The world now knows the truth that George Bush and his lap dog Tony Blair invaded Iraq for oil. The false pretext that they used was to remove weapons of mass destruction in Iraq. While I accept that Saddam Hussein has committed crimes against the Iraqi people, the British or US government have no right to impose their will on any country, be that Iraq or Ireland.

The message is clear on the third anniversary of the invasion- US out of Iraq, Britain out of Ireland.

May I please express my outrage at recent developments within the Six Counties. The IRA have made enormous sacrifices in the area of disarming their weapons and have met with scant reciprocation. Indeed, instead of even meagre concessions in this regard, the wider nationalist community has not failed to note with mounting concern the increasingly belligerent pronouncements of the loyalist paramilitaries.

So while the nationalist community speaks the vocabulary of peace, loyalist groups have made quite explicit their intention to gun down republican ex- prisoners, escalate their operations as seen by their recent targeting of a Catholic taxi driver and have made clear their intention never to disarm.

The British authorities' recent release of a well known, violent loyalist personality on account of a technicality compounds the growing sense of unease at the course recent developments have taken. We need not add the sheer absurdity of the pressure placed upon the decommissioned IRA to decommission(!) while scant attention is given to the loyalists who remain armed, dangerous and increasingly confident.

These are unsettling times for nationalists who have never before felt more isolated and more abandoned since the bleak days of the late '60s.

Martina Anderson is quite right when she calls for 'radical engagment' with unionists (An Phoblacht, 9 March). Engagment with unionists means working on the ground, attempting to unite people from both communities to overcome exploitation and common difficulties. This is something that has been done with some success in areas of the North. However I think it would be fair to suggest Sinn Féin's stance on the recent loyalist march through Dublin had less to do with engaging with unionists than a fear of offending the sensibilities of the south's respectable chattering classes.