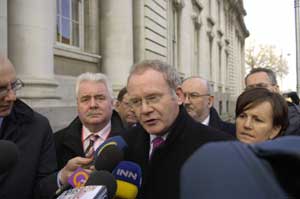 • The Sinn Féin delegation led by Martin McGuinness and Gerry Adams, head into Government Buildings for a meeting with Taoiseach Bertie Ahern

Speaking on Wednesday before the meeting, Sinn Féin Chief Negotiator Martin McGuinness MP, accused the two governments of considering proposals to accommodate the DUP's refusal to accept the power sharing arrangements set out in the Good Friday Agreement.

McGuinness said: "Sinn Féin has expressed publicly ,and directly to the two governments, our belief that they are pandering to the rejectionist demands of the DUP. The proposals put forward for talks, which would have excluded Sinn Fein, are clear evidence of this.

"In our view, the two governments must defend robustly and resolutely the principles of equality, inclusivity and mutual respect which underpin the Good Friday Agreement and they must take the lead in resisting DUP attempts to destroy its underpinning architecture and safeguards. Up to now both governments have failed to do so.

"They have no strategy for the implementation of the Agreement or for facing down negative unionism. In fact, they are now considering proposals, which centre on a shadow Assembly, to accommodate the DUP‚s refusal to accept the power sharing arrangements set out in the Good Friday Agreement.

"These proposals are totally unacceptable to Sinn Féin and, in our view, it is a mistake for the governments to go down this road. We will be telling both the Taoiseach and the British Prime Minster when we meet them this week, that this approach will only further encourage DUP intransigence and represents a real threat to the integrity of the Good Friday Agreement.