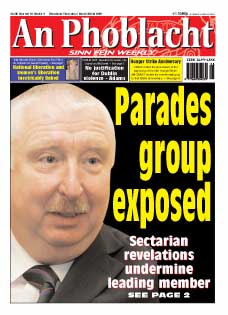 Following revelations earlier this week that none of those selected by the Six County Direct Ruler, Peter Hain, to join the new Parades Commission had any of their references checked before being appointed, it can now be revealed that Portadown Orangeman and DUP member Don McKay was a respondent in a Fair Employment Tribunal case heard during late 1991 and 1992.

SDLP assembly member Dolores Kelly called on an Orangeman on the Parades Commission to resign after it emerged he used her name as a reference without permission.

Kelly said Mr MacKay has written to her to apologise but she said Hain had serious questions to answer.

The Parades Commission was set up in 1997 to make decisions on whether or not restrictions should be imposed on controversial parades during the North's marching season.

It has now emerged that McKay was a respondent in a Fair Employment Tribunal case. The case was heard on 11 November 1991 and again on the 8, 9 and 10 January 1992. The case was listed as James Meek (applicant) v Fire Authority for NI, Lisburn; & Donald McKay, c/o Whitla Fire Station, Belfast (Respondents) and the Case Reference number was 50/90 FET. It was brought against the Fire Authority and McKay, who, at the time, was a Station Officer at Whitla Fire Station, by a Mr Meek, a Protestant fireman married to a Catholic. Although Meek's case failed, it did not stop the Fair Employment Tribunal making highly critical comments directed at the Fire Authority and McKay in particular. The Fair Employment Tribunal stated that there was evidence that Station Officer McKay had played loyalist tunes in the fire station.

"We are satisfied that the applicant was telling the truth when he alleged the playing of loyalist tunes by Station Officer McKay."

There was further evidence in the case that McKay had sold copies of a calendar distributed on behalf of the Orange Lodge he belonged to in order to raise funds.

In Paragraph 4(6) of the Fire Authority's Equal Opportunity Policy at that time, provided that it was essential that Divisional Commanders and heads of departments should ensure that all those with managerial and supervisory responsibilities, perform their duties with full knowledge of the implications of the equal opportunities legislation. In this respect, it would appear that as a Station Officer, with managerial and supervisory responsibilities, McKay was not complying with the Fire Authority's Equal Opportunity Policy.

The Tribunal specifically criticised McKay when they stated;

"In relation to the playing of loyalist tunes, we do not believe Station officer McKay but the applicant"

"In relation to his tune playing and other activities on behalf of an Orange Lodge of which he was a member, we believe generally that Station Officer McKay could be faulted, especially given his position of authority."

It went on to state that McKay's activities "should have additional significance for the (Fire) Authority."

It also found that it was more likely than not that McKay had assaulted Fireman Meek. In relation to this allegation of assault, the FET pointed out that there was a conflict of evidence and no corroboration of either man's story. Nevertheless, the Fair Employment Tribunal continued,

"Applying our common sense to the evidence, we would have to ask why the applicant would make such an allegation against a superior officer .....We have seen the applicant conducting his case before us over a number of days and his conduct of his case was impressive. We do not believe that the account which he gave to us of this incident was baseless."

The Fair Employment Tribunal then made the following very telling remarks;

"We prefer his (Meek's) evidence here in the main and believe Station Officer McKay's evidence on this matter (of the assault) to be incredible and untrue."

Although failing to uphold Fireman Meek's case of religious discrimination, the Tribunal said in its conclusion;

"The evidence before this tribunal (was) damaging and embarrassing for a service which has provided so much for the people."

In June 2004, the British government, issued a consultation document entitled "A Single Equality Bill for Northern Ireland - a disscussion paper on options for a Bill to harmonise, update and extend, where appropriate, anti discrimination and equality legislation in Northern Ireland". Such is the relevance of the Meek case involving the Fire Authority and Don McKay, that the case along with several others is referred to on page 55 of that document setting out the government's own proposals in the chapter dealing with discrimination.

Given this week's earlier revelations, many nationalists will now be wondering what other skeletons lie in the cupboards of other members of the Parades Commissioners. The Commission's credibility is now seriously undermined and questions need to be answered, specifically by Peter Hain.