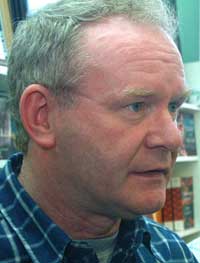 Speaking on Wednesday in advance of Ian Paisley's meeting with Tony Blair and a meeting between the Irish and British Government's later in the week Sinn Féin Chief Negotiator Martin McGuinness said it was the responsibility of the two governments to see the Good Friday political institutions re-established.

"The current stalemate cannot be allowed to continue. People have a right to the institutions which they voted for. People have a right to proper political representation from the politicians they voted for. The nonsense of a suspended Assembly is not sustainable. Anything short of fully functioning institutions is unacceptable to Sinn Féin," said McGuinness.

• An end to the illegal suspension of the institutions imposed by the British Government in October 2002.

• The triggering of the d'Honte mechanism, for electing the Executive.

• Substantive progress on outstanding aspects of the Agreement including demilitarisation, equality and human rights issues

• Northern representation to be brought forward in the Oireachtas

• Delivery of a peace dividend for the North and border counties.