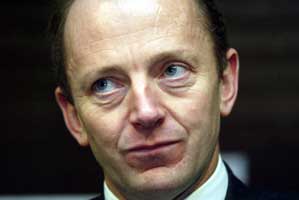 The IMC reports to the British and Irish Governments in the next week or so. Soon afterwards the report will be published.

Established as a concession to rejectionist unionism, this so-called independent commission with its government appointed, £600-a-day salaried commissioners has acted like the proverbial albatross around the neck of the Peace Process in recent times.

For too long now the Commission has firmly held the political process hostage at the behest of its political and securocrat masters.

So, their report when it surfaces will once again be based almost entirely upon "intelligence" briefings by Special Branch and baseless allegations from some notable anti-republican elements in the media.

But despite the fact that the IMC hasn't failed them yet there is some evidence that, as the anti-Agreement vultures circle in anticipation of yet another excuse for stalling political progress, they are not as sure of their ground as previously on what to expect from the Commission or how it will be received.

Unionist-friendly elements in the media are busier than usual setting the scene for a negative interpretation of the IMC findings, whatever they might be.

"Commission likely to give the IRA another thumbs down," writes Liam Clarke of the Sunday Times. "IRA still a force in criminal activities" says the Belfast Newsletter. "IRA crime network expanding," writes the Sunday Life.

No evidence is offered of course, just the usual reworking of familiar themes.

More evidence of uncertainty is the advance explanation for the report not being as 'clear' or negative as the no-camp require.

"IMC report must not be swayed by government," ran the editorial. "The IMC itself is very much on trial," unionist MEP Jim Allister told the media.

Allister warned that the British Government "can be expected to use spin and manipulation to put a favourable gloss on conclusions about IRA activity". But the IMC must resist and "stick to the truth, the whole truth and nothing but the truth", said Allister.

Alongside this we have had the emergence of a difference of opinion amongst British Direct Rule Ministers, the Irish Government and PSNI senior officers on the state of play since the IRA statement of July last. Comments by NIO Minister Shaun Woodward to the effect that much had changed since then was challenged and swiftly countered by a negative briefing to the Policing Board by PSNI Assistant Chief Constable Sam Kinkaid.

Dismissing Kinkaid's comments, Taoiseach Bertie Ahern claimed PSNI Chief Constable Hugh Orde had briefed him to the contrary. Questioned about Kinkaid's comments during a visit to Delhi, Ahern said Hugh Orde, "the most senior police officer" had given him a "different view".

These apparently conflicting assessments by the two most senior PSNI officers was immediately picked up by the media prompting a swift clarification by Orde. He denied that he had briefed Bertie Ahern in a way which conflicted the Kinkaid statement. And just for emphasis this was followed by a statement from a spokesperson for the PSNI Chief Constable which said Orde stood 100% cent behind the view expressed by Kinkaid.

Why the sudden fuss? The IMC has after all delivered the type of report required by the securocrats in the past. Why the worry that they may not do so in the next week or so? Certainly not because Alderdice, Grieve and company have been converted to the meaning of independence or the acceptance of the norms of natural justice.

Securocrats, rejectionist unionists and anti-republican media are in a bind. Their concerns are not about the state of mind of the Independent Monitoring Commission and what they might conclude. It is because they know what we all know and what we don't need an IMC report to know. The IRA have delivered on their commitments.

So, just in case anyone is still in doubt as to the outworking of the IMC report, whatever its content or whatever the accompanying commentary from either the British or Irish Governments, the DUP has announced, well in advance, that it will not be participating in inclusive power sharing arrangements "for the foreseeable future".

And, bang on cue, in steps the SDLP with its timely and typical contribution saying they are prepared to accept less than the Good Friday Agreement. They will accept the absence of power-sharing with non-elected appointees running the various government departments. So much for the rights of everyone to the institutions they voted for.

Meanwhile, DUP leader Ian Paisley has presented his party's document for the way forward. And surprise surprise, the DUP don't want to move forward after all and share power with northern nationalists. Instead they cling to the hope of recreating the failures of the past, notions of re-establishing unionist domination and fantasies about devolved government but no power sharing. And more surprise, more surprise, the SDLP are preparing to facilitate this.