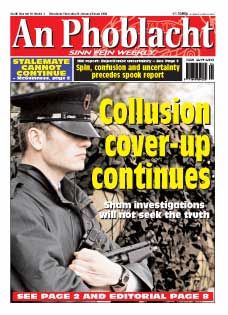 Historical Enquiries - Families will not co-operate

Relatives of those murdered through collusion between the British state and unionist death squads announced they will not co-operate with the PSNI's recently unveiled Historical Enquiries Team.

Through the HET one of the main protagonists in the conflict in the North, the PSNI Special Branch will investigate itself. Relatives and Sinn Féin point out that this body has a vested interest in hiding its own involvement in murder and that of other state agencies. Survivors and relatives of the victims slammed the exercise as a mechanism to hide the truth.

Launched on Monday the HET will report to PSNI Chief Constable Hugh Orde. It initially spoke of investigating 1,800 "unsolved murders". State killings are not categorised by the state as murder and therefore not included in this statistic. Later commentators referred to around "3,000 conflict related deaths" but the exclusive pre-occupation of the HET is clear.

The PSNI's vast resources will not investigate PSNI killings. That task falls to the under-funded and restricted investigative powers of the Police Ombudsman.

"What we are left with is a ridiculous situation whereby someone killed by paramilitaries will have their death investigated but someone who was killed by the RUC must continue to wait for the funding to be made available to get their answers," said Paul O'Connor of the Pat Finucane Centre.

Relatives For Justice spokesperson Mark Thompson described the HET as a limited police and criminal justice initiative in the absence of a proper truth recovery process to aid peace building.

A spokesperson for the campaign group An Fhirinne, Robert McClen-aghan said the HET initiative did not offer an adequate or viable method of providing the truth about the policy of collusion over the past 35 years.

Sinn Féin MLA Gerry Kelly said: "The Historical Enquiries Team does not come close to the process of truth and justice which families have sought. This is again a case of the state investigating the state when the reality is that collusion was a British state policy. The British state is actively suppressing the truth about collusion. This is the core reason that the Finucane family is still being denied the inquiry which they were promised.

"Indeed while £30 million is being spent by the HET the agreed investigative and oversight mechanism, the Ombudsman's office, is being starved of the resources needed to pursue retrospective investigation of RUC involvement in collusion and state violence."