Memories of Christmas and prisons 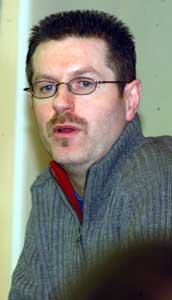 I Love Christmas! There I've said it. Slag me all you want the next time you see me. I don't care. It's a great holiday. Mind you I've very mixed memories of Christmas, some good, some not so good, and quite a few awful ones. Most of those were spent in one prison or another. One particular Christmas stands out for me. One of the good ones. In fact a great Christmas altogether.

The day before Christmas Eve 1998 (I think!) I and dozens of other prisoners were released from the H-Blocks on 13 days parole. The previous year we had been released for three days. In the weeks running up to the holidays the leadership on the outside had been pressuring the Brits very strongly behind the scenes to adopt a more generous attitude towards parole. Within the prisons gossip, rumour, speculation of all sorts was rife. What parole were we going to get, three days or three weeks? Who would qualify?, me?, not me?, a few?, a lot?, everyone? When would we know? When could we tell our families? They were desperate to know. The tension grew as nerves frayed and hopes continued to rise and fall with every new round of speculation.

Just days before Christmas we received a two or three -page circular from the NIO Prisons Dept, giving some of us 13-days parole. Some but not all. I was one of the fortunate ones but some were not. For them and their families our release would only make their Christmas, seem all the more lonely. But with great generosity they wished us well as we set off on our 13-day adventure.

And what an adventure. We drank, danced, shopped, dined, loved. Some partied the time away, while others preferred the quite company of family and friends at home.

My Christmas, I must add, fell somewhere in between the two. Our families did everything they could to ensure that we wanted for nothing as we were handed new clothes and spending money. Many had saved, for weeks perhaps even months going without little luxuries, so that we could be pampered.

I had a great Christmas that year. But as I write this, I remember as well the not so good ones and I'm thinking right now of the prisoners and their families who remain separated, who might get parole or might not this Christmas. Merry Christmas to every one of you.

Our greatest strength throughout the most difficult years in prison was always our comradeship. None of us are free until all of us are free, and every family reunited. Lets all of us make a new years resolution to battle that little bit harder to bring them all home in 2006.