If Long Kesh walls could talk - BY MICHELLE BOYLE 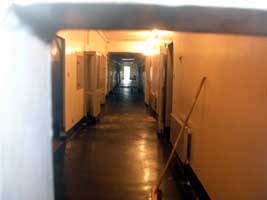 "Imagine what it would be like to be locked up naked in solitary confinement, 24 hours a day, and subjected to total deprivation of not only, common everyday things, but of basic human necessities, such as clothes, fresh air, exercise and the company of other human beings. Imagine what it is like to be in this situation in surroundings that resemble a pigsty, and that you are crouched naked upon the floor in a corner, freezing cold, amid the lingering stench of putrefying rubbish with crawling, wriggling white maggots, all around you, bloated flies pestering your naked body, the silence nerve-wrecking, your mind in turmoil. In short imagine being entombed, naked and alone." — Bobby Sands

These were the chilling words used by a Blanket man to describe the conditions in the H-Blocks of Long Kesh during the infamous Blanket Protest. Words, which 30 years on still send a shiver down the spine of those who reads them. The H-Blocks will no doubt hold this imagery for many who lived through these times. But perhaps most will remember it as the place where, in 1981 led by Bobby Sands, ten men died on hunger strike.

Long Kesh lies just outside Lisburn, ten miles from Belfast. The H-Blocks are set on a stretch of long bogland, in low-lying water tables. So it is not surprising that the prisoners had to endure cold, damp conditions. Pearse Doherty observed: "The whole place was designed to curtail the human spirit. It is clearly designed to break down the revolutionary. As the Hunger Strikers proved that didn't work."

Walking through the gates of Long Kesh you can't help but think of the hundreds of families whose steps you are tracing. Families, who week after week went on this journey, through the same gates, being searched by the same warder, to see their loved ones, year after year.

Letterkenny Councillor Gerry McMonagle pointed out the hardship and turmoil that the families endured during these times: "Women would have to leave Strabane at half past seven in the morning because visiting in the Blocks started at ten O'Clock. From ten until 12. These women would have to ensure that they were home again before two to get the children off school, and make the dinner. This trip was done twice a week, which was hard on the families making such long journeys and juggling with the running of a home virtually singled handed. They were hard times for the women who had to do this, but they never questioned anything, just did what they had to do."

Today Long Kesh lies empty, nature reclaiming her, until all-party agreement can be reached on its future. Trees grow through the Nissen huts that were once 'the Cages', time taking its toll on the structures. There is a sadness hanging over the place and around the whole site. Images of hundreds of internees, can't help but fill your mind. Walls scream out at you, harbouring the darkest secrets of human suffering.

For republicans Long Kesh also holds proud memories, memories of defiant men, who refused to bow to the torture they endured. Bonds were built, that would never be broken. Events took place that would shape the future of republicanism.

Undoubtedly, one of the most emotive places in the H-Blocks is the prison hospital, where the Hunger Strikers gave their young lives. Walking through the corridors to the ward, is a dismal journey. The H-Blocks are cold, solid concrete buildings, harbouring damp, and holding on to every chill in the air. The rooms where these men died are much like the rest of the prison — cold, dreary and damp. The rooms are tiny. Inside them lie the beds where they died.

Buncrana Mayor Pádraig Mac Lochlainn was seven years old at the time of the Hunger Strike. He was in England and holds particular memories of the period. "For me the emotional part was going into the room where Bobby Sands died. I'll never forget it. It sticks in my head, in my memory as a young lad. My father was imprisoned in England at the time and it came across the radio that Robert Sands MP has just gone into a coma. The grief was unbelievable, I remember the grief in the house. All the women breaking down and crying. Talking to people in my age group, it was unbelievable the impact it had on them all."

To the ordinary person the H-Blocks may seem nothing more than another empty building. But for republicans it is more than this. It is much more than another historical site. It was in these rooms according to Pádraig Mac Lochlainn that Irish men took the struggle to the attention of the world.

"It is a hugely important place from an international perspective. The Hunger Strikes were a massive international event. The Thatcher Government, which had taken over in 1979, tried to break down republicanism and to criminalise Ireland's fight. That Hunger Strike without doubt told the world that these are political prisoners and that they are fighting a struggle to remove the British, and they are not criminals. It was absolutely, massively important."

It is in these cold buildings that hundreds of men were interned from 1971. Men robbed of their youth, interned without trail and thrown in Long Kesh for years on end.

The issue of what should happen to Long Kesh has been the subject of much discussion. After visiting the site members of this delegation said their belief that the site should be preserved has been re-affirmed. Pádraig Mac Lochlainn commented: "It has to be a museum, its part of all of our history and we should perhaps see it as a centre for peace and reconciliation. There is no question that part of it should be a museum, fixed up and restored. I would also be in support and my party is in support of the idea of a multi-purpose sporting facility."

For those who endured its torture, the memory of Long Kesh is etched across their minds never to be effaced. For the rest of society we can only imagine what those men went through. Perhaps we cannot even imagine. It is clear that Long Kesh holds many secrets. It is a symbol of an era when ordinary working-class Irishmen, stood up and took on the might of the British Empire. Whatever your political allegiance, you cannot deny the historical importance of Long Kesh. Hunger Strikes, prison escapes, Blanket Protest. There is little that the walls of the Long Kesh have not seen. Long Kesh, The H-Blocks if only walls could talk.