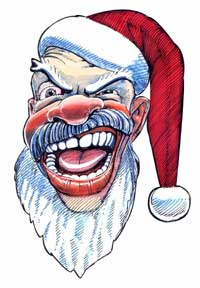 Yes comrades it is indeed THAT time of year again. Most of us are looking forward to the break, Christmas dinner and the whole show. There is, of course, one amongst us who hates this entire time of year. Republicanism's own resident Scrooge can't help himself at Christmas. He hates it and every year he lets us know why.

He is the man who definitely prefers Setanta to Santa. The problem is that Celtic don't play on Christmas Day. Consequently, he is forced to be nice to people for a WHOLE day. He knows its Christmas time, but Bob Geldof he ain't!

You are perfectly entitled to read on, but we did warn you!

Christmas comes but once a year. I reckon two times a year Christmas would probably lead to something akin to an insurrection that would get the entire fake good time fest banned under the Hague Convention of the Child or the UN Charter against Torture. The peelers will be out with the breath test kits to stop people driving their cars when they are pissed. Actually the Free State's finest are missing the point.

Why is it that people who are model road users all year round suddenly decide to drunkenly waltz sideways into a ditch the very day they know that the road is crawling with peelers?

They're trying to get away from something very, very scary to risk that I'll tell ye!

Crimbo is the time of the year when your nearest and dearest decide that you've had one Solstice too many and decide to off you. The one thing that criminologists are all agreed on is that Christmas is dangerous. People who detest you (your family) have to pretend to like you for up to 48 hours while everything is closed. One entrepreneur even has a party game about a "Murder Mystery" for the whole family at Crimbo (http://www.great-murder-mystery-games.com/christmas-party-ideas.html)

"Christmas party ideas: Christmas is a time for friends and families, for celebrations — and of course for throwing parties. And what better way to celebrate the spirit of Christmas than with a murder mystery party?" This is a level of bad taste that would make Cormac circa 1980 blush.

This Crimbo murder mystery gig should, in fairness, really be done under trade descriptions, as the guy who gets killed isn't related to the person that kills him.

That is not, my friends, the true sprit of Christmas.

In fact there is something quite off about killing a perfect stranger at Crimbo, that's what you have family for.

Even the Brits and the Germans stopped trying to kill one another in the trenches on the Western Front in 1914. Christmas is not a time for killing strangers. We are told that when the truce was called the lads met in no man's land, had a kick about, a few shots (drinks that is) and then "their thoughts turned to home".

I feckin bet they did!

The real great murder mystery at Christmas is why, given the combustible mix of being locked up with people you hate and boozing to oblivion, is that so few of us actually get killed or indeed, end of killing that uncle you never could stand since you were ten.

Maybe there was a time in history where people really liked their relatives, although I personally doubt it.

People needed to cosy up to the other members of their clann for basic survival from, well other clans, and other primordial delights like starvation, cold, bears, wolves... you get the idea.

These days, no matter the weather, you can tell people with the same DNA to feck off and go get yerself a breakfast roll out of Centra.

On Crimbo though, this fairly civilised escape route is not available to you. The wee girl at Centra is off enduring her own Crimbo with her mum dropping hints that time is running out for her to become a granny.

Do that gig in an alcoholic stupor without an exit door and you have trouble.

These are, after all, the people you go to extreme lengths the entire rest of the year avoiding. To heap insult upon misery you have been required in the days before this grimness to actually fork out way over the odds to buy them some bit of rubbish at 17% APR. They, of course, counter-attack with their own bit of useless crap that you have to pretend to be delighted to receive.

If there is a murder industry then Crimbo is their marketing department's best move yet.

In the age of reality TV every house gets turned into a prison controlled by Big Brother for a day. I'm surprised that the Channel 4 people haven't just rigged up thousands of living rooms to watch the horrors unfold.

It might, in fact, save a few lives among the viewers.

As a kid we would play board games. One Christmas Santa sent me a Cluedo set. The fact that I had an uncle who was a dead ringer for Colonel Mustard was taken by this ten-year-old to be a bit of sound scéal from Santa.

Christmas is the horrible exception.

Perfectly sane people stagger out to their cars and take their chances on the road to get away from Aunt Mary, or that brother-in-law of yours who is something in Dell.

Well I'm spending mine with my family of course, lovely people.

It has, after all, been an entire year since...

Now where is that lead piping?