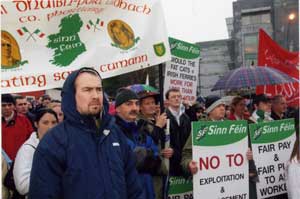 Sinn Féin spokesperson on Employment and Workers' Rights Arthur Morgan TD said although the agreement reached in respect of the Irish Ferries situation was not "the preferred outcome" it was an advancement on the what was originally proposed by the company. Morgan called for ongoing inspection by the Labour Inspectorate and surveyors from the Department of Communications, Marine and Natural Resources of the Irish Ferries' ships to ensure compliance with the terms and conditions of the binding agreement.

"I welcome the fact that the agency workers will not be subjected to wages below the minimum wage applicable in this state and that this will be written into a binding legal agreement. I welcome the fact the terms and conditions will be better than originally proposed.

"The gains achieved by the unions demonstrate the importance of solidarity between workers in opposition to displacement and outsourcing. Last Friday 9 December the people of Ireland came out in large numbers to support these workers and demonstrate that the public at large do not accept the development of a low-wage, exploitative labour market. The gains achieved, for the existing workforce and the new staff, prove that it is worth marching, it is worth protesting, it is worth joining a union. I am however disappointed that the agreement reached allows for the re-flagging of the remaining Irish Ferries ships. It is important at this point to note that the situation at Irish Ferries may never have arisen if the Irish Government had not opposed the Ferries Directive when it came before the Council of Minister in 2004. Sinn Féin will continue to demand the introduction of such a directive.

"The terms and conditions contained in the binding agreement will need to be inspected and enforced. I call on the Minister for Enterprise Trade and Employment to ensure that there will be regular inspections of records at Irish Ferries to ensure compliance with the agreement to abide by the minimum wage. I call on the Minister for Communications, Marine and Natural Resources to ensure that surveyors from his Department will, in light of this company's past record of exploiting workers on board the MV Normandy,on an ongoing and regular basis inspect Irish Ferries ships when they are docked in Irish ports."

Meanwhile, Sinn Féin MEP Mary Lou McDonald reissued a call to the Taoiseach, Bertie Ahern to raise the issue of Irish Ferries at the European Council meeting and ask for the 1998 Ferries Directive, which was backed by the EU Parliament in 1999, to be re-tabled.

Speaking on Wednesday she said: "Last nights agreement between the unions and management at Irish Ferries is very much a mixed bag.

"Whilst I obviously welcome the fact that greater terms and conditions have been negotiated with existing staff, and that foreign workers will be raised to the minimum wage, I am concerned at the companies ability to reflag itself elsewhere.

"In a meeting with the EU Commissioner for Transport Jacques Barrot yesterday evening, we explained to the to him that that the practice of using flags of convenience is not only unacceptable but it is wrong. This trend will lead to a situation where workers throughout Europe lose out as standards plummet.

"Following our meeting with Commissioner Barrot and the unfolding developments through the Labour Relations Commission, we are continuing to call on the Taoiseach, Bertie Ahern to propose the re-tabling of the 2002 Ferries Directive at the European Council meeting on Thursday and Friday of this week."