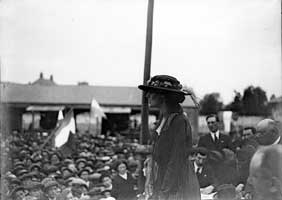 In an article first published in Múscail last February, Caolfhionn Ní Dhonnabháin argues that the current appallingly low level of female participation in parliament and positions of power in the 26 Counties, must be viewed against the backdrop of partition and the subsequent development of the Free State.

If you were to be told that a state existed where 50% of the population was White and the other 50% was Black and were then told that only 13% of those elected to the parliament of that state were black, would you be outraged?

Currently 13.8%, or 23 out of 166, of those elected to the Dáil are women. The world average for the participation of women in parliament is 15.4%. The European average is 18.1%. The 26 Counties falls below the Sub-Saharan African average of 14.6%. Turkemenistan has twice the percentage of female elected representatives as the 26 Counties while Sweden at 45.5% has over three times as many.

Only three out of the 14 Ministers which Bertie Ahern nominated to Cabinet in the current Dáil are women while only one out of the 17 Ministers of State which he appointed are women. According the figures published by the National Women's Council of Ireland, women account for only 3% of managing directors, 9% of secretaries general in the civil service and 7% of high court judges.

Yet the astonishingly low level of female participation in parliament and in positions of power has not been met with an outcry. That is because inequality for women has been ingrained in the state since its foundations. The current role and position of women in the 26 Counties must be viewed against the background of partition and the development of the Fee State.

Writing in the Irish Worker in March 1914 James Connolly warned that partition "would mean a carnival of reaction both North and South, would set back the wheels of progress". This proved to be the case for women in the new 26-County state.

Ireland had a vibrant women's equality movement at the beginning of the 20th Century, led by women such as Hanna Sheehy Skeffington, Meg Connery and Margaret Cousins. Many of those active in the organisations of suffragism were also active in nationalist and socialists organisations.

James Connolly, a champion of equal rights for women often spoke at meetings of the Irish Women's Franchise League (IWFL), which was established in 1908.

The years directly preceding the Easter Rising were characterised by a debate between those women who sought a parallel fight for women's rights and those who believed that this could be put on hold until the establishment of an independent Ireland when such rights would be delivered on.

Women participated in Sinn Féin, the Irish Citizen Army and the Gaelic League on equal grounds as men but were not admitted to the Irish Volunteers, a fact that resulted in the foundation of Cumann na mBan.

The Irish Citizen, the paper of the IWFL, criticised Cumann na mBan for accepting an inferior role to men in the struggle for Irish freedom while Cumann na mBan pointed out that a vote in a British parliament would be of little use and Inghinidhe na hÉireann were contemptuous of the idea of demanding votes for women along with Home Rule.

The suffragette Emeline Pankurst once said: "We are here to claim our right as women, not only to be free but to fight for freedom" and in many ways this statement encapsulates the dilemma faced by some Irish women at the turn of the last century who chose to give precedence to the fight for women's rights because they could not accept an inferior role to men in the fight for Irish freedom.

The 1916 Proclamation addressed to Irishmen and Irishwomen, promised equal rights and universal suffrage. Women participated in the 1916 Rising and the Tan War. Women's involvement in political campaigns in Ireland went back centuries including the Societies of United Irishwomen, the Ladies' Land League, the Gaelic League, Inghinidhe na hÉireann, militant suffragism, Cumann na mBan and the Citizen Army all of which contributed to the acceptance of women's equality espoused in the 1916 Proclamation. Those who did not accept women's equality at the time of the 1916, such as Eamon De Valera who refused to allow women in Boland's Mills during the Rising, went on to form part of the reactionary establishment in later years.

A resolution affirming women's equality within Sinn Féin was passed by the Sinn Féin Ard Fheis in 1917. However, with the exception of Constance Markievicz who ran in the Dublin constituency of St Patrick's, women were not nominated by Sinn Féin to contest winnable constituencies in the General Election of 1918. Winifred Carney, a member of Cumann na mBan who was also active in the suffrage and socialist movements, was nominated for a largely unionist Central/East Belfast constituency which she had no chance of winning while Hannah Sheehy Skeffington refused the unwinnable constituency of North Antrim. Surprisingly Kathleen Clarke was not nominated to run in any constituency. Only one of the Sinn Féin Deputies elected to the First Dáil — Constance Markievicz — was a women.

Cumann na mBan members opposed the Treaty by a huge majority, partly because women stood to lose more by a compromise settlement. They rightly saw that their rights would only be guaranteed by a republican victory. Women were prominent in the anti-Treaty side during the Civil War.

It has been argued that the Civil War had a negative effect on male perceptions of women's right to participate in political life and this perception was translated into legislation enacted by successive Free State governments, which placed obstacles in the way of women's participation in politics. However, the fact that those who came to power in the 26 Counties post-partition came from a conservative tenant farmer class, who were equally opposed to the causes of feminism and socialism, also played its part.

Though in 1921 women in the 26 Counties were granted an equal right vote as men, women's access to power by way of economic independence came under attack from the reactionary governments of Cumann na nGael and Fianna Fáil. A raft of legislation was introduced in the period following partition including the discriminatory Civil Service Regulation (Amendment) Bill, 1925, the Juries Act 1927 and Conditions of Employment Bill 1935.

The Civil Service Regulation (Amendment) Bill, 1925 sought to confine state examinations for senior civil service positions to men. The legacy of this legislation is clearly evident in the figures referred to earlier which show that women currently account for only 9% of Secretaries General, the highest grade in the civil service

Despite the fact that women had served as judges in the Republican Courts during the Tan War, the Juries Act, 1927 was introduced to exempt women from jury service.

The Conditions of Employment Bill 1935 gave power to the Minister for Industry to restrict employment of women in industry. Among those who campaigned against this were women such as Helena Moloney and Hanna Sheehy Skeffington, while the Labour Party, which claimed to represent the legacy of Connolly, argued against equal pay for women and gave complete support to the Bill.

The 1937 Constitution marked a low point for Irish women. It marked a definitive break with the promise of equality for all citizens contained in the 1916 Proclamation and was strongly opposed by many of the women who had been involved in the struggle for independence along with those women who had been involved in the Suffrage Movement. Women who had fought equally for a free Ireland were not about to be sent back into the home by De Valera and the Catholic Church.

The period since 1937 saw a minimal advance in the participation of women in Irish political and civic life. The combination of the power of the Church and the reactionaries of Cumann na nGael — later Fine Gael and Fianna Fáil who ran the State worked to halt the progress of women. That period saw the collapse of the Mother and Child Scheme, the archaic restrictions on contraception and the endurance of the marriage ban until the introduction of the Employment Equality Act in 1977.

The lack of progress in those years is evidenced by the somewhat startling fact that when Maire Geogheghan-Quinn was appointed to Cabinet in 1979 it was the first time that a woman had been appointed to cabinet since Constance Markievicz had been Minister for Labour in the First Dáil in 1919 when she was the first woman in Europe to achieve such a position.

The governments which took power following the establishment of the Free State sought to row back the progress made by women during the early years of the century when, through their involvement in the organisations of nationalism, socialism and suffragism, they claimed their right to equality. The men of Cumann na nGael and Fianna Fáil worked to ensure that women would never again reach the positions of power which they held when Cumann na mBan overwhelmingly rejected the Treaty.

Undoubtedly the obstacles erected by the reactionary parties which came to power in the 26 Counties after partition have contributed to the fact the percentage of elected representatives and those in positions of power such as the higher levels of the civil service remain staggeringly low compared to many other states.

If progress is to be made in bringing about a balanced participation of women and men in decision making we must reject the reactionary, anti-woman state fashioned by Cumann na nGael and Fianna Fáil following partition and strive towards the creation of the Republic envisaged in the Proclamation.