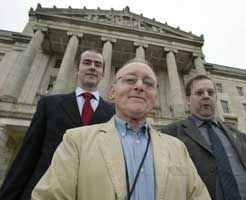 All charges were dropped against the three defendants at the centre of the so-called 'Stormontgate' controversy last week. In 2002 what was claimed to be 'irrefutable evidence' of a 'spy ring' operating at the heart of the Assembly became a mechanism by which the North's power sharing institutions were collapsed.

Sinn Féin's Denis Donaldson, Ciarán Kearney and William MacKessy appeared at Belfast High Court on Thursday, 8 December to be told that the case against them had been withdrawn and verdicts of not guilty would be recorded against each charge.

With the media preoccupied with the plush interiors and historic handshakes of a meeting between an Irish President with a British Monarch, someone somewhere must have realised it was a good day to bury bad news. But there is no hiding the fact that the most blatant act of sabotage against the political process in the Six Counties carried out securocrats within the British security and intelligence system now stands utterly exposed.

Accompanying the three men's return to Stormont for the first time since their arrests, Sinn Féin President Gerry Adams dismissed the notion of a spy ring as fantasy. "There never was a spy ring", said Adams. The allegations had been spread by elements within the PSNI hostile to the peace process. There was clear evidence of political policing, he said.

"The five people charged in relation to Stormontgate have been found not guilty of charges. There are elements within the Special Branch, some former members of the RUC still active within the PSNI, who continue to be at war with Irish republicans. They oppose Sinn Féin. They are opposed to the peace process", said Adams.

Speaking of his ordeal, Ciaran Kearney said there had been misinformation "on a grade scale". Those accused had been subjected to trial by media. "Following our acquittal, I hope that the media will focus on the elements within Special Branch that brought down the Assembly", he said.

Unionists have claimed the decision to drop charges against the Stormont accused was a cover-up.

DUP MLA Ian Paisley Jnr described the news as "deeply disturbing". "It is quite disgraceful that yet again the judicial process has been manipulated in order to placate an IRA agenda",he said.

For the UUP the collapse of the case reeked of another 'side deal' between the British government and Sinn Fein. "If this is the case it is yet another concession that the DUP have been powerless to stop", said UUP deputy leader Danny Kennedy.

Meanwhile the British Secretary of State was attempting to have his political cake and eat it. The idea that the initial arrests had been politically motivated was "preposterous".

Taoiseach Bertie Ahern appeared to be bemused. Speaking after a meeting with the British Prime Minister at Downing Street, Ahern expressed his disbelief. The Taoiseach had found the acquittals "very interesting" but difficult to understand given what had been claimed to be "irrefutable evidence" that led to the collapse of the Assembly Executive. "This created huge grief for me and for the Prime Minister. We had hundreds of troops descending on Stormont buildings because of what we were told at the time was irrefutable evidence. On Thursday it vanished", he said.

"Stormont-gate was a huge issue at the time. It brought down the institutions. We were told there was irrefutable evidence and now Stormontgate has vanished in its entirety", said Ahern.

Three years ago it had all been very different with lines of armoured PSNI vehicles and armed personnel lining the leafy Stormont mall.

A tip off from the PSNI had ensured that there were no shortage of media cameras and commentators to capture the moment as boiler-suited members of a PSNI raiding squad ran through the main entrance and into the offices of Sinn Féin.

And it had been a big story of spies and sabotage and surveillance. Yet despite the media furore there had been inconsistencies from the very start.

In sharp contrast to the PSNI pantomime of armoured vehicles and armed officers, only two discs were ceremoniously seized from Sinn Fein's offices. Within days the PSNI Chief Constable Hugh Orde was forced to apologise and both computer disks, a Windows 95 and a recovery disk were quietly returned.

The then British Secretary of State John Reid claimed he had been made aware of a republican 'spy ring' operating at Stormont months previously.

On the one hand we were being asked to believe that the matter was so serious and the evidence so indisputable it was sufficient to bring down the power sharing arrangements, while on the other so insignificant the British government had known about it for months but did nothing.

"A major IRA intelligence-gathering operation concentrating on Stormont and Castlereagh Special Branch has now been smashed, according to the PSNI", reported Gerry Moriarty of the Irish Times.

"Police smash Provo spy ring", ran the front page of Belfast's Newletter. "A spy ring which operated from the heart of the IRA has been smashed in one of the biggest police operations in the past ten years."

But few journalists stopped to ask why "the biggest police operation in the past ten years" had been mounted when even the recently promoted Deputy Chief Constable Alan McQuillan admitted there was "no immediate threat" .

Worse still media reports suggested that not only was at least one of those arrested completely innocent but that he was known to be innocent by the PSNI. According to the media William Mackessy was being used as a stooge to cover the tracks of a Special Branch agent.

Even at the time, many commentators were forced to admit it was pure political theatre and it wasn't difficult to see the real story behind the face paint. Republicans dubbed it a 'Save Dave' strategy.

Just weeks earlier David Trimble had survived another leadership challenge by his party's ruling body, the Ulster Unionist Council. But only by adopting the anti-Agreement position of the DUP. Having finally capitulated to the unionist No camp Trimble was no longer leading the UUP but merely running to keep up at the front.

The proposals, universally endorsed by the UUC weren't just anti-republican, they were against the Good Friday Agreement too. Trimble had emerged 'triumphant' from the council meeting but not by overcoming anti-Agreement unionism but endorsing it.

The UUP had adopted "a wrecker's charter" and it was widely perceived as such. It was increasingly suggested that unionists? Anti-Agreement stance was less to do with a moral dilemma of working with republicans and more to do with a sectarian rejection of power sharing with nationalists. Worse still, this realisation was emerging during a period of persistent unionist sectarian violence.

David Trimble had been his colonial master's 'great white hope' but in the event the British couldn't save David Trimble and the UUP couldn't save itself. Despite adopting the rhetoric of rejectionist unionism, the UUP suffered a massive defeat at the hands of the DUP at the following election. And the rest, as they say, is history.