Justice Minister out of control 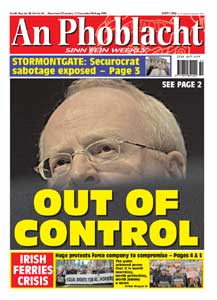 A huge political storm has erupted this week after 26-County Justice Minister Michael McDowell admitted that he leaked Garda documents to the Irish Independent in the ongoing smear campaign against leading investigative journalist Frank Connolly.

Taoiseach Bertie Ahern is coming under sustained political pressure to deal with a Minister who is now clearly out of control and who many believe is attempting to introduce in the 26 Counties many of the elements and characteristics of a police state.

Last week in a reply to a question from Independent TD Finian McGrath, McDowell claimed that Frank Connolly had travelled to Colombia on a false passport accompanied by a leading member of the IRA. Connolly strongly denied the allegation.

It then emerged that Atlantic Philanthropies, run by leading US businessman and philanthropist Chuck Feeney had withdrawn funding from the Centre for Public Inquiry after representations by McDowell.

Speculation mounted over the weekend as to whether McDowell was behind leaks to the Independent which had formed part of a long campaign of vilification against the journalist, and particularly over McDowell's close relationship with Independent journalist Sam Smyth. Smyth had written several damaging pieces about Frank Connolly and the Centre for Public Inquiry.

Then, as he was interviewed live on RTE radio on Monday by Seán O'Rourke, McDowell admitted he was indeed the person who leaked to the Independent documents purporting to show a bogus passport application form which had borne a photograph which the Minister said was that of Frank Connolly.

In the Dáil last Tuesday and Wednesday, Taoiseach Bertie Ahern defended McDowell by saying that he acted to defend the security of the state. He refused to say what that threat to the state was. He asked TDs to wait to hear the Minister.

McDowell then came into the Dáil and told what can only be described as a child's fairy tale. First he repeated without substantiation, his claim that Frank Connolly was in Colombia on a false passport. Connolly has not even been charged with this offence, let alone convicted of it. But on this basis alone, the Minister and the Government built their claim of a threat to the state.

The Minister linked his allegation to the Colombia 3. He went on to claim that their purpose was to train FARC in return for huge sums of money for the IRA. He then compounded his allegations against Frank Connolly by claiming, again without a shred of evidence, that he was central to this plot, a plot that is a figment of the Minister's imagination.

Even the corrupt judicial system in Colombia could not convict the three men of the offence of training FARC. The Colombian Government's case collapsed ignominiously and they resorted to a secret appeal process, to overturn the verdict in process that brought international discredit to the Colombian judicial system. Giving this background, Sinn Féin Dáil leader Caoimhghín Ó Caoláin challenged the Taoiseach during Leaders' Questions, to answer: "What exactly was the threat to the state? Was it this fantasy about the IRA using money from Colombia to subvert democracy? Or was the threat from the Centre for Public Inquiry with Frank Connolly as its CEO?

"Can the Taoiseach confirm that the Minister cleared with Cabinet beforehand his decision to approach Chuck Feeney? Did the Minister show Cabinet members the document he showed Chuck Feeney and gave to the Irish Independent?

"Does the Taoiseach agree that the real threat to the security of the state is this Minister's gross abuse of his position for political purposes as he rides roughshod over due process and the right of every citizen to the presumption of innocence until proven guilty?"

Crucially, Ahern failed to answer the questions about what information McDowell gave to the Cabinet.

The day before, replying to another question from Ó Caoláin, Ahern said of Stormontgate affair: "It means we all went through a great deal of suffering for something that at the end of the day did not seem to add up on examination." (see also page 3)

In Stormontgate powerful elements of the British state fabricated a case against Sinn Féin and as a result the institutions established under the Good Friday Agreement collapsed. Three men were charged. But last week, after three years, those charges were withdrawn, the defendants acquitted. McDowell's vendetta against the Centre of Public Inquiry was also a case of a government abusing its power for political purposes. In backing McDowell, Ahern and Fianna Fáil fully share his guilt and should pay politically for it.