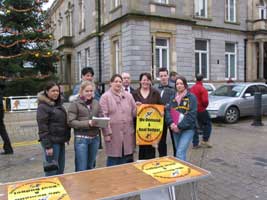 Budget capping saw a shortfall of £31.6 million this year with another £33 million shortfall expected next year. Sinn Féin Education and Library Board members joined by parents and representatives from Trade Unions protested outside the Five Education and Library Boards in August and September making it clear that Sinn Féin would not be policing a bad budget for the British Government.