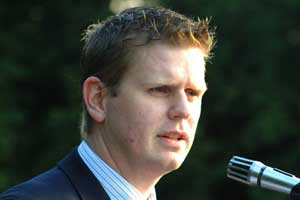 As the Fianna Fáil/ Progressive Democrats' Government marches forward with its plans to privatise services throughout the 26 Counties, the healthcare system has become a key battleground.

Here, Sinn Féin Louth County Councillor Tomás Sharkey looks at how the battle to defend the public healthcare system is being waged in his own county

In 2002, Charlie McCreevy's Budget introduced a give-away for investors in private hospitals. From that point it was not just charitable foundations that could qualify for tax breaks, but capital costs of a private 'for profit' hospital could also be written off against tax at a rate of 15% per annum for six years and a final 10% in the seventh year. In addition, the private enterprise receives a 10% discount to provide up to 20% of its beds to the public health service.

So, the tax payer is re-imbursing the building costs and then buying services in the same building at a price that shows a massive profit for the investor.

An example of this is the new private Beacon Clinic in Dublin. It is providing a year's dialysis treatment to the public health service at a cost of €68,000 per patient. This is €19,000 more per patient than the Daisyhill Hospital in Newry says it costs to provide the service. The Irish Kidney Society admits there is overcharging but it's hands are tied in the absence of proper capital investment in health by the government.

So the Department of Health and the taxpayer are paying a 41% mark-up on treatments for people in private hospitals and the government still refuses to invest in public hospitals.

In the summer of 2003 Louth GP, Mary Grehan, who is a County Councillor and Dundalk Town Councillor, organised a consortium and started exploring the possibility of building a private hospital in Louth. Grehan is now an Independent politician after falling out with the PDs. A number of years ago she helped set up the Louth Hospital Action Group which had campaigned for the retention of services in the public hospital but it has been more or less defunct in recent times.

The private hospital group met officials from the Department of Health. Then in Autumn of that year, the Louth County Development Plan was discussed and adopted. It zoned areas of land in the county suitable for housing, industry and employment activities. In June 2004, Grehan and two other Dundalk-based Independent councillors were re-elected under the banner of the Hospital Action Group. Around this time the private hospital consortium hired the retired County Manager, John Quinlivan as their project manager.

This was an important step because the site chosen for their private hospital was in Ballymacscanlon, the wrong planning zone for a private hospital. There was a need to have somebody who could navigate through the staff and offices of the County Council.

The love-bombing began. Receptions were held to launch the project, media were invited to be wined and dined. During this time, the group knew that they would not qualify for planning permission. They knew because one of their number had been a councillor when the Development Plan was adopted and another had been County Manager.

They started meeting the Planning Section of Louth County Council. Arthur Morgan and myself submitted a lengthy objection to the plans. By coming out with our position we saved the Sinn Féin team the hassle of answering flattering phone calls from lobbyists and opening envelopes packed with colourful promotional material.

By October it became clear that the management of Louth County Council planned to bring a Material Contravention of the Development Plan in favour of the hospital to a vote. We had received a commitment of solidarity from the lone Labour councillor and one Independent councillor at this stage.

The battle lines were drawn for the November meeting of Louth County Council. The current County Manager and Senior Planner submitted reports about the needs for this hospital, ignoring the fact that there is a hospital in Louth that the government has been downgrading. We were being asked to grant permission for an eleven-storey building in front of the Cooley Mountains, on a natural flood plain, with no mains sewage, exiting onto a regional road with no public transport.

In the end, there was no debate. The chairperson wouldn't allow it saying that I was too slow in indicating my wish to speak. However, when he knew that I wanted to speak, he still would not let me in.

The contravention was proposed and seconded by Séamus Keelan and Thomas Clare of Fianna Fáil. It received all seven Fine Gael votes, six Fianna Fáil and two Independents. Opposition came from the five Sinn Féin members, three Fianna Fáil, one Labour and one Independent. This motion needed 19 of the 25 present. It only got 15 and was defeated.

Media reports now reveal that the consortium is going to An Bord Pleanála with an appeal, armed with reports of support from a County Manager and Senior planner and no minutes of a debate of the council.

Louth County Council now awaits a response from the Chief Medical Officer of the Department of Health. We asked him for a meeting back in May 2004. Dundalk Town Council is still waiting for a meeting with Mary Harney. She met the private hospital group in person in May 2005.

When these people do come to listen to our concerns, we will tell them that there should be no more taxpayer's money given to their multi-millionaire buddies. The people's money should be spent on a CT Scanner for our public hospital. A long-promised Renal Dialysis should be put in place. The maternity unit which was closed "temporarily" in 2001 should be re-instated. And a 24-hour on-call surgery must be created.

It is important that Sinn Féin representatives across the state oppose to these private hospitals wherever they are proposed.