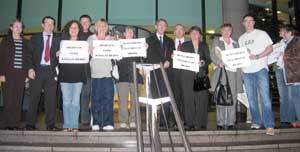 Sinn Féin protest against the ban

Sinn Féin Councillor Paul Butler has hailed the lifting of the ban on same-sex couples using Lisburn Council's Wedding Room, for civil partnerships, as a victory for the gay and lesbian community.

Legislation allowing for same-sex civil partnerships in the Six Counties came into effect on Monday 5 December.

However, Butler said that the fact that the council only lifted it's ban after it's Corporate Services Committee took legal advice showed "how homophobic Lisburn Council really is".

"There was a clear hostility to members of the gay and lesbian community shown by both unionists and Alliance members at the meeting," Butler told An Phoblacht.

"Lisburn Council fought this to the bitter end. The lifting of this ban was only passed by three votes to two. This clearly demonstrates that this is a council that has an intolerance of minorities in society. Even when faced with legal advice, that the council would have little or no chance of defending in the courts, they still tried to keep their ban on the gay community.

Sinn Féin has consistently criticised the discriminatory policies of Lisburn Council and have pledged their support for a motion to ratify the overturning of the ban later this month.

The spotlight will now fall on the unionist dominated councils of Ballymena, Larne, Castlereagh and Newtonards who have said they will oppose same-sex civil partnership ceremonies taking place on council facilities.

The wife of a serving republican prisoner from Dublin has been subjected to a campaign of harassment by the Garda Special Branch. Rhonda Troy is married to John and they have a four-year-old son, Seán.

Rhonda's home was first raided by the Gardaí a month ago. "They left the place in a complete shambles," she told An Phoblacht. "There were five of them altogether and they just tore the place apart going through clothes, overturning furniture and leaving the house in a state."

Following the raid, Gardaí made a number of visits to the house culminating in a second raid on Wednesday 30 November. After another fruitless search Rhonda offered to go to the station to make a statement but despite consenting, was arrested under Section 30.

"I was home looking after my son and niece at the time," she said, "and when they arrested me I had to leave my son and the girl in the care of an eleven-year-old boy for over an hour while my sister raced to the house because they would not wait for her to come out."

Rhonda was taken to Lucan Garda Station where she was interrogated, at times aggressively, for over three hours about her husband, his friends and associates and her contact with them.

"I feel sick," she acknowledged after her ordeal. "There have been times when I couldn't eat or sleep over the last month. I am always tense, waiting for another knock on the door. I have to make sure there is always someone in the house when I am away in case they come back. I know they are just using me to try and get at my husband, that it's just bullying, but even knowing that it's very tough for Seán and I."

Sinn Féin TD Aengus Ó Snodaigh condemned the incidents. "This is an innocent woman who has done nothing wrong," he said. "She is being targeted by the Gardaí because they see her and her child as vulnerable and they are brutally prepared to use her to get at her husband."

John Troy is currently serving a four-year sentence in Portlaoise and is due for release in December 2007.