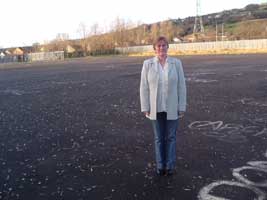 A British Government initiative to tackle poverty exclusively in unionist areas of Lisburn City Council as a policy of, "economic apartheid".

Slamming a survey conducted on behalf of the Department for Social Development which exclusively targets unionist areas for economic development, Sinn Féin Lisburn Councillor Paul Butler said: "This initiative is sectarian in its inception and irrational in its application. While claiming to address poverty and deprivation it excludes the most deprived communities of Lisburn in Poleglass and Twinbrook on the basis of religion and political affiliation."

These two sprawling nationalist estates on the outskirts of Belfast, are stuck in a state of political, social and economic limbo. Deprivation is endemic and unemployment rife.

The increasing local population find itself in a political 'no man's land' between their natural hinterland of West Belfast and the unionist dominated Lisburn City Council.

A recent report detailed how Twinbrook and Poleglass suffer a16% unemployment rate compared to 4% in the rest of Lisburn and 7% in the rest of the Six Counties. It's an area where 53% of the population is aged 24 or under.

Despite this a survey from the 'Community Convention and Development Company' asking councillors to assess what the company itself terms as exclusively 'Protestant-Unionist-Loyalist communities' for 'development, empowerment and transformation'.

Paul Butler described the policy as one of economic apartheid. "The Community Convention and Development Company, established by the Department for Social Development (DSD), is astonishingly blatant in its remit to seek out exclusively what it deems P-U-L (Protestant-Unionist-Loyalist) areas to be rewarded with financial packages from the British Government department.

"What is so galling is that the British Government's own research into deprivation, published earlier this year, once again confirmed that nationalist areas predominate in the rankings of those characterised as being the most deprived across the North of Ireland.

"In spite of this, the British Government has concocted a ruse in the form of these Community Conventions to siphon public expenditure disproportionately into unionist areas in direct response to the bigoted demands of some unionist politicians."

Butler continued: "According to the Noble measures of deprivation index, the four most deprived wards in the Lisburn Council area are to be found in the nationalist districts of Poleglass and Twinbrook.

"The stated objective of the Community Convention campaign is 'to develop, empower and transform disadvantaged P-U-L communities'. Tackling deprivation and empowering should not be restricted to unionist areas alone. This system of economic apartheid must end."

According to a report published by the Special European Union Programmes Body earlier this year Catholics make up 72% of the population of the 500 most deprived areas in the Six Counties. Within these most deprived areas, Protestants made more applications and received more funding per head of population than Catholics.

Nationalists and other minority groups in the Lisburn Council area have faced a prolonged period of discrimination and disadvantage.

Most recently the council published an information booklet that failed to mention the work of any nationalist or republican councillor despite the fact that they make up one third of the areas representatives.

The council has been very publicly embroiled in controversy over its refusal of room for same-sex couples to conduct for civil partnership ceremonies.

In an analysis conducted by the West Belfast Economic Forum (WBEF) it was found that the Colin area, which comprises Twinbrook and Poleglass, was consistently worse off than any other part of Lisburn.

Twenty one per cent of those living in the Colin area between the ages of 16 and 74 have never worked.

Paul Butler's colleague in Lisburn, Angela Nelson, described the unionist dominated council's attitude to the deprivation suffered by the communities of Poleglass and Twinbrook as one that, "is set to compound rather than alleviate the problems".

Nelson pointed out that, "over the past three years unionists on Lisburn Council have excluded nationalist councillors from senior council posts. This exclusion has made Lisburn a watchword for discrimination. It has echoes of the gerrymandering that sparked the civil rights campaign in the 1960s.

"As well as this political exclusion unionists have consistently used their majority to prevent adequate resources going into nationalist communities.

"For example, we have 5,000 kids in the Poleglass estate and not one play park. Poleglass was built over 20 years ago.

"The response we get when we raise these issues at the council is that we are simply whinging."