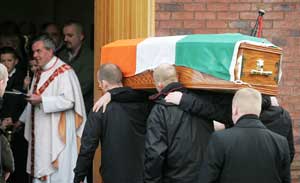 The family of veteran Belfast republican Billy McDonnell, who died on Thursday 1 December, has expressed anger at a priest who refused to celebrate Requiem Mass because the coffin was draped with the Irish National flag.

The Funeral Mass for Billy McDonnell (74) was due to be held at the Church of the Holy Spirit on the Glen Road in West Belfast on Monday 5 December. However Parish Priest Fr Brendan Beagon refused to celebrate the Mass.

The Tricolour-draped remains had been brought to the church on Sunday night 4 December where Fr Tarney initially objected to the coffin entering the church as it was draped with the National Flag and angered the dead man's family when he described the flag as "paramilitary trapping".

The priest relented however, after the family said they would remove the remains from the church. The coffin, draped with the Tricolour, was left in the church overnight.

The next morning, when the family returned for the funeral Mass they discovered that Fr Brendan Beagon had removed the flag, tearing it in the process, and replaced it with a white pall.

"We replaced the Tricolour over my father's remains because it was his wish but were told that the funeral could not go ahead if the flag was not removed."

A tense stand off between the family and the priest then developed before Liam McDonnell contacted a priest at Holy Trinity Church in Turf Lodge, who agreed to celebrate the Funeral Mass with the flag-draped remains in the chapel.

"My father was a proud and active republican and it was fitting that his coffin was draped in the Irish national Flag. During the wake in the house, the Tricolour was draped over my father's remains and one of the priests actually commented on the fact that my father must have been a republican. At no stage did any priest approach the family and ask about our arrangements for the funeral," said Liam McDonnell.

Bishop Patrick Walsh said the Church ask relatives to respect the right of the Church to regulate how a Funeral Mass should be celebrated.

"If not, this poses a great difficulty for the priest but in the circumstances the Funeral Mass should be celebrated so that the deceased will be buried with dignity."

National Graves' Association spokesperson Pat McCotter criticised the actions of the clergy involved saying previous discussions with the Catholic hierarchy over republican funerals appeared to have been overlooked.

"The family were already grief stricken at the death of their father and the last thing they needed was this petty minded attitude. It is a sad day when a family are not allowed to carry out their father's last wish," McCotter said.

Meanwhile, An Phoblacht has learned that Sinn Féin President Gerry Adams has written to Catholic Church authorities asking them to clarify their position on the presence of the National Flag on coffins during Requiem Masses.