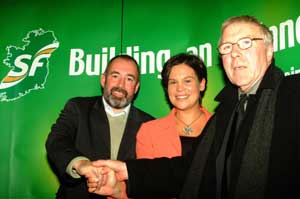 Sinn Féin Chairperson and Dublin MEP Mary Lou McDonald has been selected as Sinn Féin's candidate to contest the Dublin Central constituency at the upcoming 26-County General Election. McDonald was nominated by Councillor Nicky Kehoe and seconded by Councillor Christy Burke at a selection convention in Dalymount Park last week.

Speaking following her selection, Mary Lou said: "Three years ago, Sinn Féin came very close to taking a seat in Dublin Central when Nicky Kehoe was within 74 votes of being elected. Huge effort was put in and people throughout this constituency responded to our work in the community, our role in the Peace Process, for Irish unity and our agenda for change. And whenever the next election is called I believe that, with growing support right across this constituency, we can return a Sinn Féin TD for Dublin Central."