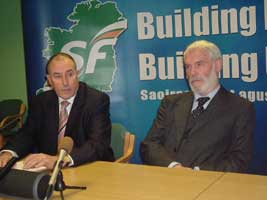 Sinn Féin MLA Francie Brolly has accused the PSNI of, "character assassination". The Dungiven-based politician was speaking to An Phoblacht on Thursday 1 December less than 24 hours after his release from Antrim PSNI Barracks, where he was held for 36 hours and questioned about the 1972 Claudy bombings.

Brolly said he was, "seething with anger", over "this politically motivated stunt". He said that, "as a public representative the PSNI could have approached me at anytime to ask me about the Claudy bombings instead of creating this charade. My arrest was politically-motivated and designed to undermine the work that Sinn Féin is doing throughout the North Derry area with people from across the community, regardless of their politics or creed."

Brolly was arrested, along with three other people including a 58-year-old woman, on Tuesday 29 November and taken to Antrim PSNI Barracks where he was questioned, during 12 interviews with PSNI detectives, about the Claudy bombings. All four were released on Thursday 1 December.

Brolly was scathing at the way his arrest was accompanied by the "now familiar leaks to the media who broadcast images of my home, putting myself and my family at risk".

He explained that the PSNI approached his wife as he was being taken away to ask her where Francie was on the day of the bombings. "My wife told them I was at home doing work on the house. Despite this they held me for 36 hours and it seems the only evidence, if you could call it that, that they were putting forward for my arrest was that I live in Dungiven, which is only ten miles from Claudy."

Brolly said that even detectives interviewing him were going through the motions as if they knew the whole thing was a waste of time.

"They seemed to know all there is to know about the Claudy bombings as they seemed to have all the information about the bombs and the cars they were transported in. So why were they questioning me?" he asked.

Brolly made it clear that he knows nothing about the attacks in Claudy and feels hurt that the PSNI would create the impression that that he had no regard or feelings for those killed and hurt in the 1972 blasts: "I knew some of the victims and I feel for them."

Meanwhile, Sinn Féin General Secretary Mitchel McLaughlin described Brolly's arrest as, "political policing. There are people who are working to a pro-unionist and anti-Peace Process agenda who are trying to heighten paranoia within the unionist community as well as create resentment within the nationalist and republican community with these stunts."

McLaughlin also criticised the SDLP, who he said, "jumped too soon over policing and now find themselves in the position of defending the PSNI's behaviour".