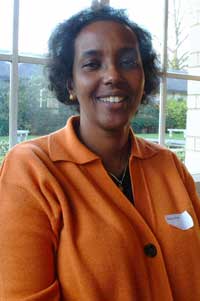 Rakiya Omar, is the Director of African Rights, an eleven-year-old organisation, concerned with human rights' issues in Africa. In contrast with other human rights' organisations, which tend to focus exclusively on prison conditions and torture, African Rights has turned its attention to social and economic rights. It aims to put the perspective of ordinary Africans on the agenda. On a recent visit to Dublin Rakiya Omar spoke to An Phoblacht.

An Phoblacht: Economic and social rights are very broad areas. What is your specific area of work?

I was in Rwanda during the genocide and that was for me the most critical experience in my life. Since then, I have been working on a document on the genocide, compiling evidence against the main perpetrators on trial at the International Criminal Tribunal for Rwanda, based in Tanzania, or in the countries were they have sought asylum. Many are in North America and Australia. We work a lot in in-depth investigations to build our cases against them. It is important for Africans to take the genocide in Rwanda seriously. If this had been the case, there would have been a more concerted and perhaps a more timely response to the situation in Darfur, for example.

We also work a lot in Somalia, where I come from myself, where a totally different approach is required. So we take each situation depending on what is relevant in the country instead of trying to find a blanket solution to situations concerning economic rights, social rights and so on.

Many Europeans are becoming aware of the central role of European tradition and policies in the creation and persistence of Africa's political and economic problems. What is the attitude of Africans to foreign interference?

Well, certainly, a lot of the problems in Africa in terms of institutions, and governments and leadership are as result of the colonial legacy and the type of colonialism that Africa experienced where there was a deliberate effort not to develop local political institutions. And the issue of justice is very relevant to the kind of formal justice system that we inherited from colonialism. There are also many European contributions to ongoing problems in Africa, particularly in the economic arena and also in relation to strategic interests, as European and North American countries have their economic interests too, for example, the situation in the Democratic Republic of Congo, and in the Great Lakes region.

But I consider it is also very important that Africans take responsibility for their own mistakes and for their own country. So I think it would be irresponsible for me to say, as an African, that all the problems of Africa are imported from outside, because that would imply that we do not have control of our destiny, and that it is not true.

Another perception in Europe is that African governments are corrupt. There are people in Europe, and especially a very well known NGO in Ireland, that ask for European aid to be directed through European NGOs instead of African governments, because these are inherently corrupt. What do you have to say to that?

I think that is a very wrong position to take. First of all, corruption is not unique to Africa, there are problems everywhere, including Europe. I think that the important point is that African governments are accountable, or should be ultimately accountable to African people, so it is for the African people to decide, if they have elected these governments, at what point they are not going to put up with these governments because of corruption, abuses or not having a political programme. Secondly, I think it is impossible for a country to develop without having a government. The best way to go forward is to engage with people of course, but the idea that Africa will develop with NGOs that are not accountable to anybody but to their donors is short-sighted and completely wrong.