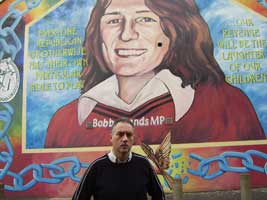 Last July the face and voice of Seánna Walsh conveyed the dramatic announcement of the formal ending of the IRA's armed campaign. Beamed across the globe, media commentators agreed on one thing — that the IRA's choice was appropriate.

Séanna Walsh served over 21 years as a republican prisoner of war in both the cages and H-Blocks of Long Kesh. He was among the first republicans to go 'on the blanket' after his arrest in 1976, the year that the British Labour Government began it policy of attempting to criminalise IRA prisoners.

Séanna was a friend and cellmate of Bobby Sands, the Officer Commanding in the H-Blocks and the first of the Hunger Strikers who died in 1981.

Since his release Séanna has played a key role in working with Sinn Féin's negotiating team. Recently he was appointed as Head of the party's Cultural Department.

Here, Séanna and Fearghal Mac Ionnrachtaigh, another member of the party's re-organised and revitalised Cultural Department, spoke to An Phoblacht about the role of Irish in the republican struggle and the departments ambitious and radical plans.

An Phoblacht: What initially sparked your interest in the Irish language?

Séanna: I first got an interest in Irish in primary school and developed it at secondary school. I was in Loch an Iúir Gaeltacht in Donegal when Internment erupted across the North. Within 18 months I found myself in prison, in the Cages of Long Kesh. I dived into the language with a passion. It was clear to me at a fairly early stage that the Irish language was much more than a medium of communication, that wrapped up in it was the history of conflict and dispossession, genocide and emigration.

How important is the restoration of Irish language to republican objectives?

Just as the revival efforts of the Gaelic League provided the dynamic for the Irish revolution in the last century, we believe that in the new dispensation, a rejuvenated and determined Republican Movement can utilise the language to such an extent that it can characterise our struggle in the new millennium.

The consequences of the colonial legacy of Anglicisation created a false sense of identity that relegates the language to that of an icon. The current process of nation building requires a detailed strategy that involves the construction of a decolonised identity to which the repossession of the Irish language is central.

In the Algerian Revolutionary, Frantz Fanon stressed that the colonialised must first ask the question, 'In reality, Who am I?' in order to re-define their national identity.

A process of decolonialisation demands that the language transcends its current symbolic status in order to achieve meaningful status and full rights for all its users. There is an onus on republicans to place a greater emphasis on the protection and promotion of the language amongst the Irish people through empowering and inspiring the learning and speaking of Irish.

In the era of globalisation, the Irish language, in surviving and flourishing can provide a link to our past and symbolise the ability of the weak and the small to survive in struggle with the strong and the big.

Our involvement in the redefinition of Irish identity will make it a liberating one which gives all of those who live on this island, irrespective of age, creed, class or political outlook, ownership of the Irish language in a rights-based society built on equality and justice.

Séanna, you are well known as one of the longest-serving republican prisoners, but you are also synonymous with the Gaelicisation of the H-Blocks. Describe the importance of the language, in your experience, to imprisoned republicans.

Séanna: In the cages of Long Kesh and during the Blanket Protest the Irish language, as it had done previously in Irish prisons, became a mainstay of republican prisoner development and resistance.

During the Blanket, we had nothing but our bodies to use as a weapon of protest, and we utilised the Irish language as a symbolic and practical means of resistance.

It legitimised our sense of cultural distinctiveness and gave us strength to 11; Snodaigh were dragged off to Leinster House.

We managed to organise the annual Slógadh events which were fairly successful, in Rath Cairn, Dún Chaoin and Gaoth Dobhair.

We have kept the momentum going on our Foras na Gaeilge project and helped in having Gráinne Mhic Ghéidigh elected in the Údarás elections.

We ensured that the issue of the Irish language has stayed on the negotiations agenda with both governments.

We supported and were involved in the 'Stádas' campaign but we have not been as active on the ground among language activists as we should have been. We have identified a number of campaigning issues, North and South, and we will be seeking to organise and mobilise around them in the coming year.

The most interesting aspect of our reinvigorated Roinn a' Chultúir will be our project to turn Sinn Féin from an English speaking party, which is fairly good on the language question, to a bilingual party involved in all areas of radical language development and promotion.

We intend to have a series of language awareness weekends, a sort of Slógadh for English speakers. This to be backed up by a series of language classes for all our major spokespersons and office workers. We will then focus on activists at cumann level. Any programme we put together will be organic and flexible, so that it can develop in different ways and at a different pace from area to area.

Séanna has spoken about the Gaelicisation of the party as a central part of the departments plans, what inspired this?

Fearghal: The initial impetus derived from a visit to the Basque Country where a group of us met with a team of cultural activists within Herri Batasuna who succeeded in developing a radical programme of language acquisition within their movement.

In 1991, Batasuna successfully implemented a five-year plan that involved all party members learning to write and speak their native language, Euskara. In the Basque Country, the leadership shown by Batasuna on this issue became the catalyst for a resurgence of national culture and identity amongst the Basque people.

Batasuna has transformed into a bilingual party and has since moved to the position where all party business is now conducted in Basque. The original five-year plan took seven years and having attained bi-lingual status they continued to develop it over the years since.

A consequence of the Batasuna strategy has been that the other political parties in the region have moved to adopt their language policies to ensure they are not left behind on the issue.

Similarly, by providing positive leadership on the language issue, republicans can become the driving force in the process of building a new Ireland. This approach has proved successful in regard to the pro-active direction given by Sinn Féin on Irish unity.

How does the party intend to implement a 'radical programme of language acquisition' for republican activists?

Feargal: The battle for hearts and minds has been identified as the key first step in the Gaelicisation strategy. A cultural awareness/education program is currently being developed with the aim of convincing activists about the importance of the language in the struggle to achieve our political objectives. It will centre upon the historical legacy of cultural oppression and colonialisation, and motivate activists on the need to reinforce our sense of national identity through the restoration of the language. It will make up part of the Education Departments' induction programme for new members.

The program will be summarised as a day-long seminar with presentations, discussions and workshops to be launched in the New Year at Irish language residentials, organised in each province. These will be modelled on the annual Slogadh but will appeal to both Irish speaking and non-Irish speaking activists. Various intensive language courses of different levels will be piloted in conjunction with a cultural awareness focus.

We also aim to target personnel in each Cúige who can identify potential teachers throughout the country to be trained in the delivery of intensive language courses.

We will provide intensive training courses for potential Irish teachers and have sought the advice of language acquisition experts to aid in designing specific courses for party activists. The five-year plan will require people, funding, time and commitment. It will require leadership, participation and endorsement.

Our longer term objective is to deliver the cultural awareness program followed by intensive language courses to all existing activists throughout the country creating a bilingual party, fully educated and re-focused on the centrality of the Irish language and culture to our project of nation building.

In light of its ambitious nature of the plan, has the party leadership been encouraged by it?

What we intend to do is unlike anything that's ever been tried before in this country. We intend to put in place classes for our broad membership, but also a one-to-one programme with leadership spokespeople. We want to see a situation in the short to medium term where our main spokespersons are able to talk about their specialist area of interest in both Irish and English, it doesn't matter if it's policing, the Peace Process, agriculture or human rights.

We intend to bring a radical, staged approach to our work with Foras na Gaeilge and Údarás na Gaeltachta. We've got to ensure that we don't fall into the trap set by civil servants and bureaucrats, that we don't become just administrators of government funds. We've got to ensure that we bring our vision of creating a bilingual society in the short-term into being on this island.

As regards the Údarás, we are still on a learning curve. Gráinne is very eager and committed and knows the type of Ireland she and we want to create. With practical, on the ground help and assistance, we are confident of providing a first-class service from a first-class Údarás representative.

How successful has Sinn Féin been in promoting the language and do you envisage the language playing a prominent role in the party's agenda in the time ahead?

Séanna: Sinn Féin has a consistent record on Irish and successfully held the British Government to account on a range of commitments made during negotiations. Amongst other achievements, Sinn Féin was instrumental in the establishment of the cross-border language body Foras na Gaeilge and the formation of Comhairle na Gaelscolaíochta and Iontaobhas na Gaelscolaíochta which have revolutionised the development of the Irish medium sector in the Six Counties.

Similarly, the successful growth of the Irish-medium education sector cannot be overestimated. This was recently emphasised by Séanna who stated that, 'we have worked tirelessly to ensure that Irish-medium education is put on a firm foundation and built upon throughout the North. It is now time to look at all the adults across the country who would like to be able to speak it but haven't got around to it.'