Addressing the historic opportunity for change 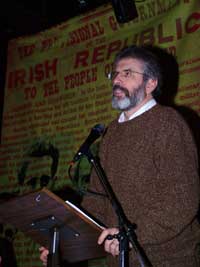 Conference - An Ireland of Equals

Organised to mark Sinn Féin's Céad Bliain celebrations the conference was built around the theme of An Ireland of Equals. It focused on those areas of social and economic organisation in a partitioned country, that have left many ordinary people marginalised and estranged from the political system.

The conference organisers emphasised the point that Sinn Féin believes in a united Ireland where national sovereignty is underpinned by social equality.

The point was also strongly made that there now exists an historic opportunity to shape and build a new and united Ireland, based on robust human rights and equality standards where communities are empowered at all levels to participate in the decision-making process. An underlying theme was the political openings created by IRA initiatives since 1994 and the challenge to Sinn Féin activists to deliver on this historic opportunity.

Although Sinn Féin is committed to building An Ireland of Equals it is felt that this can only be done through mobilising the collective strength of the people of Ireland.

In his address David Joyce threw up points that republicans need to consider on any road to our Ireland of Equals. Joyce, now a barrister, has worked with the Traveller Community for many years. He told the conference that Travellers are marginalised from politics in Ireland and face negative attitudes from local authorities wherever they go. He cited the case of one family, the McDonaghs who have been served with 27 summonses in 13 years ordering them to move on. Being forced to move on means the family cannot get on to a housing authority waiting list. Even though the McDonagh children suffer ill health they do not receive any sympathy from the local authorities.

An interesting international perspective dealing with the concept of participatory democracy was given by Sanna Brolin a District Mayor in Stockholm, Sweden. From the Swedish Left Party Brolin outlined how in her district she had set up a programme to give children aged between five and 13 a say in how to effect change in their lives. "This initiative gave the children a sense of their own power and ability to change things," she said. Right-wing parties in Sweden didn't oppose this through what Brolin described as a, "campaign of hate propaganda".

Five workshops formed the centre of engagement at the conference, the sharing of ideas and experience which was the day's focus. All addressed common questions of how to make progress towards a human rights based Ireland, which brings those who are "outside of the door of power", into new structures of governance which can deliver an Ireland of Equals.

Dave Connolly spoke about work in Dublin's inner city which has been ravaged by drugs, unemployment and poverty, and the on-going project initiated by Inez McCormack, amongst others, to link with North Belfast addressing the common exclusion of those marginalised through poverty.

Constitution for a united Ireland

Catríona Ruane spoke of the equality provisions in the Good Friday Agreement and the undertaking in that Agreement to introduce an all-Ireland Bill of Rights.

The second workshop discussed a constitution for a united Ireland, and how this might come about, and how it would be made effective. Daltún O Ceallaigh outlined, in a much praised presentation, the all-Ireland structures, envisaged in the Good Friday Agreement, for transition towards re-unification.

Davie Joyce, from the Irish Travellers Movement spoke of his experience working with the Traveller community and their battles for enforceable human rights. Shannonbrooke Murphy, head of Sinn Féin's Policy Department, spoke on the development of Sinn Féin's Rights For All consultation paper.

Discussions ranged widely over a number of issues including the anomalies in rights for Irish speakers, to the need for an all-Ireland constitutional supreme court to enforce an All-Ireland Bill of Rights and how Sinn Féin cumainn could use the Rights For All paper as a tool for local political outreach.

The third workshop went to the heart of cross-border experience of disadvantage, and the economic impoverishment in the border counties. Sinn Féin MP for Newry/Armagh Conor Murphy MP spoke of the difficulties in accessing the bureaucratic structures and language of EU funding, while Kate Burns reviewed the very positive experiences of ICBAN, supported by Sanna Brolin who emphasised the need to engage people in democratic decision making.

The workshop concentrated on the problems arising from the very existence of the border, the difficulties of accessing services from providers, often much closer across the border, the importance of integrated planning, and the wide opportunities this presents for cross community engagement.

The Workshop on Community Empowerment raised revolutionary ideas on how social economy structures could promote empowerment of people in their daily lives. The current organisation in most companies in Ireland today serves to disempower or alienate people in terms of control and distribution of the wealth they produce, as much as in the management and ownership structures of their employment.

Sinn Féin General Secretary Mitchel McLaughlin gave what was widely hailed as a brilliant talk. Philip O'Connor, from the Dublin Employment Pact, an NGO which has done much work on funding opportunities for Social Economy, and Cormac McAleer, of the Community Foundation NI, who was involved in the An Creagan community enterprise initiative, shared their experience, and discussed amongst other issues the problems and limitations in the scope and concerns of organised labour in confronting the disempowerment of workers.

Mick O'Reilly, of the ATGWU led off the workshop on Participatory Democracy. He talked of the grave problems raised by Irish Ferries, which was but the tip of a huge iceberg, of employers trying to use migrant labour to worsen labour conditions and rates of pay.

Patricia McBride spoke then of experience of the Six-County Civic Forum, and the difficulty of ensuring that an All-Ireland institution of participatory governance would not just be restricted to the "good and the great". She was followed by Inez McCormack, who talked of the need to engage, and how to do so, with the people who are 'left outside of the door' in our society, if change is to happen.

The workshops were packed and lively. Engagement around human rights' issues and the potential within the Good Friday Agreement, to advance an Ireland of Equals, the need for participatory governance, human rights and equality legislation, and the cross community integration in the border counties, were usefully explored a part of a conference intent on progressing discussion around an Ireland of Equals.

Republicans want change in the here and now — Adams

Sinn Féin President Gerry Adams framed the politics of the day in terms of the republican vision. Setting out objectives in straightforward terms he said: "Sinn Féin must prepare itself for government in order to make the 1916 Proclamation a reality".

Speaking of the vision of the free Ireland that sustained republicans through centuries of struggle against British rule, he warned that republicanism had to be made relevant to today, "for it is the modern Ireland that we live and struggle in".

"The mission statement for us and for modern Irish republicanism is the Proclamation. It directed itself to Irish men and Irish woman at a time when women didn't have a vote."

Adams told the gathering that republicans are not prepared to wait until there are changes, saying they want to see changes in the here and now: "We have the biggest budget surplus in the history of the 26-County state and yet we have the highest gap between rich and poor in any industrialised state outside of the USA.

"What is the economy for? Is it for the guys from Irish Ferries? Is it for the people who are going to benefit from the privatisation of health services?"

Adams, in highlighting these examples was pointing to the need for party activists to build a party that will represent Irish society and which will not only demand change but actually bring that change about.

He concluded by drawing the attention of those present to the main body of work that Sinn Féin needs to focus on. "We need to bed down the Peace Process, ensure the full implementation of the Good Friday Agreement, because Tony Blair and Bertie Ahern are not going to do so and we need to move forward towards a United Ireland.

"We have a lot of things to do, but we have the confidence in our ability as Irish republicans to complete this mighty task after 100 years of struggle by this party."