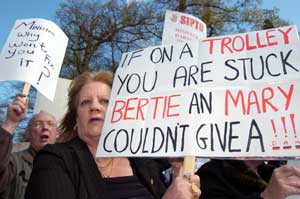 If you think the health services in Ireland has problems now, just wait until Mary Harney and Tony Blair have finished with them. The privatisation of health is accelerating and only determined campaigning can prevent the ultimate destruction of public services in the interests of private profit.

Scaremongering? Tell that to the people of County Monaghan. Every prediction made by campaigners there has been vindicated. Services were cut back and then removed. The Maternity Unit was taken away. The Accident and Emergency unit followed. Local campaigners said people would die and it has happened. Pat Joe Walsh who died last month was only the latest victim of a policy that prevented surgeons in Monaghan from operating on him.

Last week in the Dáil, Sinn Féin's Caoimhghín Ó Caoláin asked Taoiseach Bertie Ahern if he recalled the events of 14 October 2005, which was the date on which he last visited Monaghan town. He went on: "Patrick Walsh bled to death in Monaghan General Hospital on that day because the surgical staff there were not allowed to perform a straightforward procedure to save his life. The doors of the operating theatre were quite literally barred to Mr Walsh." And the Sinn Féin Dáil leader asked: "Is the Taoiseach aware that yesterday the Health Service Executive published proposals from the Royal College of Surgeons in Ireland and the national hospitals office which, if implemented, will set in stone the scandalous conditions which led to the deaths of Mr Walsh and others?

The Taoiseach replied that the Health Service Executive is "satisfied that implementation of these recommendations will result in a significant increase in the level of surgical activity at Monaghan General Hospital and more efficient use of the personal facilities available on the site."

The anger and determination of local campaigners was reflected in the contribution of Peadar McMahon of the Monaghan Community Alliance, one of the speakers at last Saturday's conference on health privatisation.

Held in Dublin's Liberty Hall, the conference heard echoes of the Monaghan experience in hospitals around the country. Dr Christine O'Malley, Vice President of the Irish Medical Organisation spoke of the impact of the death of Pat Joe Walsh on many in her profession who simply wanted to be able to treat patients. People in Nenagh Hospital, where she works, feel they could be next.

While public hospitals go from crisis to crisis the Fianna Fáil/Progressive Democrats' Government is pumping public money into the private health industry through tax breaks and Mary Harney's plan to give land at public hospital sites to developers of private hospitals. Dr John Barton of Portiuncula Hospital in Ballinasloe, County Galway described the privatisation process in the 26 Counties. "As private activity increases, public activity decreases," he said and told of a process where resources and talent are sucked into the private health business.

The keynote speaker was Professor Allyson Pollock, author of the book NHS plc which exposes how 'New Labour' is privatising the National Health Service. It is only a matter of time before this process is rolled out in the Six Counties, creating an all-Ireland problem of privatised health services.

The Sinn Féin TDs were represented by Seán Crowe TD, spokesperson on Social and Community Affairs. Sinn Féin Louth County Councillor Tomás Sharkey spoke from the floor on how planning in that county is being manipulated to facilitate a private hospital facility.

It is to be hoped that Saturday's conference represents the start of a national campaign, linking up local hospital campaigns, healthcare workers and the general public in support of State-provided health services. Three key demands can already be identified:

• Develop the public health system into one which provides equal access to all.

It was clear from Saturday's conference that much work has to be done before a national campaign emerges. But it is vital work that must be accomplished.

Mary Harney last week opened a new state-of-the-art health facility in Sandyford in Dublin. But this facility will not be affordable for Medical Card holders or others on low incomes because it is a private facility, built with the support of lucrative government tax breaks.

Sinn Féin Health spokesperson and Dáil leader Caoimhghín Ó Caoláin said the Tánaiste and Minister for Health and Children is "hell bent on pursuing a private health agenda to the detriment of the public system". He urged people to campaign in support of the public system and for an end to the two-tier public-private divide. He said the Minister's visit to Sandyford exposed her real intentions. Ó Caoláin said:

"It is a disgrace that the Tánaiste was the first across the threshold of such an exclusive private facility. The primary care centres which would provide equal access and which were promised by this government have been put on the long finger.

"The Tánaiste and Minister for Health and Children is hell bent on pursuing a private health agenda to the detriment of the public health system. Her primary responsibility is for the public system which is funded by taxpayers' money and which is charged with providing healthcare to all the people. But her agenda is clearly to build up the private health business.

"Private clinics and hospitals are benefiting to the tune of many millions in tax breaks from this government. The government cannot tell us how much these tax breaks cost. At the same time the public hospital system — and especially A&E services — are in crisis. While A&E units have been shut down in smaller hospitals around the country, including in Monaghan in my own constituency, the private healthcare business which offers privileged access to those who can pay, is flourishing courtesy of the Tánaiste and her colleagues.

"I welcome the fact that people are increasingly aware of and angered by the health privatisation agenda of this government and Sinn Féin urges people to unite in a campaign for a public system with equal access for all."