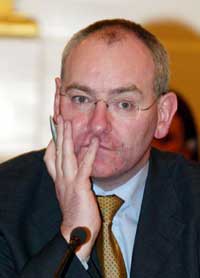 Over the past two weeks the SDLP has been using legislation to address the anomaly of people displaced by the conflict, the so-called 'On the Runs', in a crude and spurious attempt to undermine Sinn Féin.

Addressing his recent party conference, SDLP leader Mark Durkan accused Sinn Féin of cobbling together a deal with the British Government which delivers amnesty to members of the British crown forces involved in a range of murders and controversial killings in the North.

Stretching credulity even further in the Derry Journal, Durkan even claimed republicans had "sold out the families of state collusion". Sinn Féin in negotiating on behalf of the OTRs had "let state killers and loyalists off the hook", he said.

Apart from being based on lies, the campaign by the SDLP demonstrates the utter hypocrisy of that party. If the SDLP leader was genuinely concerned about letting British state killers off the hook, he could have looked closer to home, at SDLP MP Eddie McGrady for example. In 1991 commenting on a RUC shoot-to-kill operation in which an unarmed IRA Volunteer was staked out and ruthlessly and summarily executed, Eddie McGrady commended the RUC on their "restraint".

Durkan might also like to recall the repeated failure of his party to support relatives of the victims of state collusion, even to the point of refusing to meet delegations of family members at Stormont and Westminster.

Indeed for many years the SDLP refused to believe that collusion even existed, preferring to ignore the growing evidence while dismissing Sinn Féin's exposure of collusion as 'unfounded allegations' and 'republican propaganda'. Then as now the SDLP was more at ease with adopting unionist positions on state 'security' and denying the nature and scale of violence by British state forces.

The full measure of SDLP hypocrisy can be gauged by the fact that republicans and their families were targeted more than any other section of population by state-sponsored death squads. Years of inaction by the SDLP gave tacit approval to those who summarily executed unarmed IRA Volunteers in their homes and to those who murdered family members of republicans and terrorised their households through gun and bomb attacks and to those who murdered Sinn Féin activists, election workers and elected representatives.

It is the British state which is trying to cover up collusion and protect its operatives, not republicans who for decades attempted to expose it. The very suggestion would be laughable if the issue was not so deadly serious.

The SDLP know their allegations are baseless. The campaign to allow people displaced by the conflict to return home without fear of prosecution did not include members of the British state forces. Why would it? There are no British soldiers or members of the RUC on the run.

The position negotiated by Sinn Féin with the British and Dublin Governments was set out during the Weston Park talks and is available for public scrutiny. A cursory glance at the documentation confirms Sinn Féin's position that there was no mention of British forces.

"The scheme we negotiated was published by the two governments at Weston Park in 2003 and related only to 'on the runs'. It did not include members of the British state forces," said Sinn Féin President Gerry Adams.

"Indeed one of the key factors in Sinn Féin rejecting the position produced by the two governments at Weston Park was the British Government's refusal to agree to an independent judicial inquiry as called for by the family of Pat Finucane."

"Sinn Féin's position is absolutely clear. We are opposed to the inclusion of British state forces in the current legislation. Sinn Féin will continue to confront the British Government on the denial of truth about collusion.

"Our party activists, including elected representatives, were primary targets in this policy of state murder. Only last week I was told that my personal details, compiled by British Intelligence agencies, had been passed to loyalist death squads.

"This is an urgent and immediate issue for Sinn Féin and we will continue to support victims of collusion and state violence. The British persist in denying their policy of collusion. They must acknowledge the truth and those who directed this policy, including senior British political figures, must be held to account," said Adams.