Call for Mobilisation to to defeat Irish Ferries thuggery 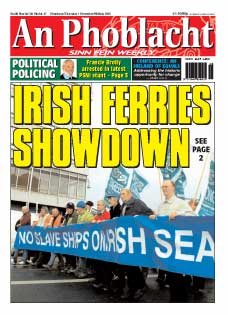 As Sinn Féin's Arthur Morgan TD blasted the Taoiseach in Leinster House on Tuesday night during the first emergency debate permitted in the Dáil for four years he spoke for thousands of people across the country bewildered at the indifference and impotence of the Fianna Fáil Government to defend Irish workers.

Last Thursday night, reports began to trickle in of armed private security thugs boarding the Ulysses and the Isle of Inishmore docked in Welsh ports and workers responding by with established security procedure and 'locking down'.

By Friday morning people awoke to news that one of the most serious confrontations in recent Irish industrial history had escalated into all-out war. A torrent of cross-party condemnation of management action, with the notable exception of the Progressive Democrats, descended on Irish Ferries with Sinn Féin National Chairperson and Dublin MEP Mary Lou McDonald saying she supported the workers without reservation.

On Sunday workers in Rosslare, acting in solidarity with their comrades in Irish Ferries refused permission for the Normandy to dock at Rosslare, obliging the ship to be redirected to Dublin where workers allowed it to dock on humanitarian grounds. All four vessels of the Irish Ferries fleet are now out of action.

"We intend to make this Sunday protest a weekly event until the dispute is resolved in favour of the workers. I would also thank the local Labour Party for its practical demonstration of support with three prominent local members driving through the picket in their new BMWs."

One side or the other

On Friday SIPTU President Jack O'Connor called for a national day of protest, which is now set for Friday 9 December, and for workers to turnout in their droves to show their opposition to "thuggery, brutality and the law of the jungle".

He went on: "At moments such as this it is not enough for those entrusted with public responsibility to utter comforting words and do nothing else. To use an old adage, 'All that is required for evil to prosper is for people of good will to stand back and do nothing'.

"In a moment such as this you are on one side or the other."

The focus of the confrontation shifted from the streets and ports to Leinster House on Tuesday. Party spokesperson on Workers' Rights, Arthur Morgan TD, represented Sinn Féin in an emergency debate called to consider the issue.

"This matter is not just about Irish Ferries," he declared. "It is about the type of society and standards we want. As a senior trade unionist put it at a recent meeting, we need a threshold of decency. That threshold should ensure that poor people will get proper services and proper terms and conditions of employment. Irrespective of what Ministers say, the buck stops with the Taoiseach but he is not doing anything about this matter.

"Irish Ferries has effectively declared war on the rights and conditions workers have gained over many years. If the company is allowed to proceed in this way, the floodgates will open. Some Ministers say that this issue is peculiar to Irish Ferries. That is not the case and everybody on both sides of the House knows it. They are only trying to put up a smokescreen to gain time. They should not be allowed to get away with it."

As An Phoblacht goes to print attempts are being made by the Labour Relations Commission and the National Implementation Body to resolve the dispute following the company's decision to withdraw its security personnel but the reality is that the confrontation is likely to continue, and escalate, before being resolved.

"The meeting was a very useful and positive development by itself," said Mary Lou McDonald. "But it was the crisis in Irish Ferries, which seems to be unfolding and changing on an hour-by-hour basis which formed the bulk of the meeting. We assured the SIPTU leadership of our full support in this struggle and of our intention to mobilise Sinn Féin members and supporters for the national demonstration on 9 December."

The private security firm hired by Irish Ferries in an attempt to seize control of ships docked at Holyhead and Pembroke has been identified to An Phoblacht as Risk Management International (RMI), an Irish firm based at the Citywest Business Park.

The company claims it was established "in response to a growing need amongst senior business leaders to address a range of Risk Management issues, including the security threat from terrorism and organised crime".

On its website the company boasts it "quickly developed a name for developing contingency plans and crisis management structures designed to manage 'difficult to confront' threats to personnel and products".

Reports from some of the staff, perhaps defined as 'difficult to confront' on the vessels indicated the security staff were armed with metal bars and crowbars. Media reports at the weekend indicated Irish Ferries' management had considered the use of tear gas against workers.

Speaking in Leinster House on Tuesday night Sinn Féin spokesperson on workers' rights Arthur Morgan TD said: "The actions of the company last week in putting on board the ship's stormtroopers from a company specialising in global terrorism to enforce a new regime on Irish workers were disgraceful. To deploy such overtly military personnel, who may well have been armed, is a disgrace."