Hain accused of breaking rules in sop to DUP 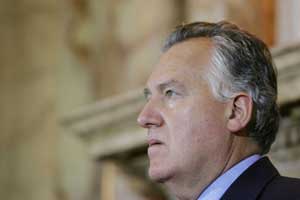 Controversy over the appointment of Bertha McDougall as the North's Interim Victims Commissioner on Monday 24 October may end up in court after the human rights group Relatives for Justice (RFJ) accused the British Government of failing to carry out a proper consultation.

RFJ Director Mark Thompson is angry over the way British Minister Peter Hain appointed McDougal, widow of an RUC reservist killed by the INLA in 1981, as he believed it contravenes equality and employment legislation. "This is not about the person or individual. It is about disregarding due process and failing to properly carry out consultation. Peter Hain appears to have broken every rule in the book in making this appointment. The post was not advertised, nobody was given the right to apply and then only one political party was consulted, the Democratic Unionist Party, who are actually claiming to have approved the appointment."

A number of West Belfast families, whose loved ones were killed by British crown forces, share RFJ's concerns over McDougall's appointment. Neilly Rooney, whose nine-year-old son Patrick was shot dead in his home in Divis Flats in 1969 by the RUC said he was concerned the appointment was made without consultations with groups such as RFJ. "I would personally like to meet Mrs McDougall as there are things that I would like to ask her before I would trust her. I can't say whether she will be impartial until I sit and talk to her."

Meanwhile, in a further controversy involving an Northern Ireland Office (NIO) appointment the former head of the Probation Board, Breidge Gadd, has claimed she was unfairly dropped from the running for a post with the Parades Commission. Gadd accused the NIO of ignoring equality rules and being manipulative in its selection process. "I am fed up with what I think is manipulation by people in the NIO in the Security Division and my suspicion is that they don't follow the rules of equality and opportunity when they are selecting people."

Gadd said she would make a complaint but by the time it was dealt with the positions on the Commission would be filled. "There is no way I can have a chance now as my complaint would have to go to the Ombudsman in England because it is an NIO position and because it's a commission it is outside all the equality legislation here."