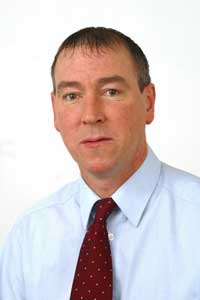 How do you compress into a number of lines all that an activist like Daithí Forde has achieved in a relatively short time? Daithí's most recent involvement in Sinn Féin started during the latter half of the last general election in the 26 Counties. He simply appeared into a hectic Sinn Féin centre in New Ross one day and as soon as I saw him I realised that here was a guy who was enthralled by what he was witnessing. People were busy doing all the usual election stuff. Phones were hopping mad, people were chattering away on mobiles and in the middle of all of this stood Daithí Forde. He was well and truly hooked.

During the weeks after the general election, I got to know Daithí quiet well and already I was planning to involve him in future party development in County Wexford. He had that spark. That something special which can't be put into words but which set him apart from others.

During that time, Daithí worked in stores in Wexford General Hospital and he had very strong views on the issue of healthcare in Wexford and specifically on the issue of the downgrading of Wexford General. It turned out that Daithí had in fact been waging his own personal campaign on a number of local issues through a website that he had set up a few months before the general election in order to present an alternative view of Wexford. And so it was sealed. There was a meeting of minds between myself and himself. Here was a guy who thought exactly as I did on the issues of the day and there was no way that he was going to be allowed to sit in some stores while campaigns needed to be fought.

At this time, it had been decided to yet again attempt to actively develop the Leinster Cúige and Daithí was selected as Leinster Organiser. He blossomed in that role and took a particular pride in the fact that Sinn Féin had achieved close on 40,000 first preference votes in the Leinster constituency during the last EU elections. This result was directly attributable to the work of Daithí throughout the constituency. During that campaign he often joked about the fact that he had to coax me to leave Wexford to campaign. I didn't realise that he was keeping a tally on the amount of times I did actually stray over the borders of Wexford. It's our secret.

At the beginning of this article, I mentioned that Daithí's "most recent involvement in Sinn Féin started in the latter half of the last general election in the 26 Counties". He had, as a student studying Hotel Management, been involved in the Smash H-Block campaign in Dublin. It was during this time that he and other activists stormed Leinster House to protest about the silence of the Dublin Government while the British were criminalising Irish republican prisoners in the Blocks. He often recounted with glee how the Blueshirt Minister for Justice had demanded that they be removed from the chamber. In describing the incident, Daithí summed it up by saying: "I thought the f***** was going to have a heart attack."

Daithí Forde was a truly inspiring example of a republican activist. His determination to develop the party and to seek to expand our areas of activity was nothing short of awe inspiring. The energy and enthusiasm with which he approached every task is an example to every one of us. Most of the time he remained in the background, the one exception being to allow his name go forward for the last local elections for Wexford Corporation. He narrowly missed being elected and those of us who knew him knew that Daithí was not at all disappointed at not being elected. He was most comfortable behind the camera rather than in front of it.

Daithí Forde died in the early hours of the 30 October 2005 from stomach cancer. On behalf of all republican activists and supporters, I would like to extend our sincere condolences to Daithí's family. To his Mam and Dad, his sister and brother and his three children, Thomas, Ciara and Lyndsey we offer our heartfelt sympathy. Go ndéanfaidh Dia trocaire ar a anam.