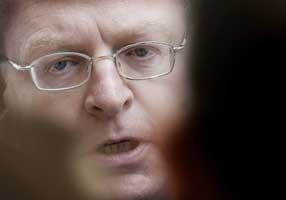 In an arrogant and exclusivist declaration last weekend the 26-County Minister for Justice and PD Deputy Leader Michael McDowell made clear his opposition to Taoiseach's Bertie Ahern's proposals for representation for Six-County parties and MPs in the life of the Oireachtas.

McDowell's pronouncements highlighted the confusion, division and hamfisted approach of the coalition government to the issue and raised the spectre of a PD veto in the cabinet on Six-County policy.

Confirming widely-held suspicions about Progressive Democrats' opposition to Bertie Ahern's proposal McDowell said that the Good Friday Agreement envisaged a forum in which parliamentarians from the Oireachtas and Six-County Assembly would participate.

But in an interesting summation of PD policy, which amounts to a unionist position McDowell then said: "The Progressive Democrats reject the idea that a parallel North/South Board should be established within the Oireachtas which would sweep away the basis for what was envisaged in the Agreement, and which would tend to reward Sinn Féin abstentionism."

McDowell declared that it was "unacceptable" that Sinn Féin MPs would not go to Westminster, but instead "would come South and participate in sessions of the whole Dáil in the Dáil chamber. That's simply not acceptable to us under any circumstance."

Earlier in the week Sinn Féin Dáil leader Caoimhghín Ó Caoláin said he had written to the Taoiseach asking what the status of the proposals for Six-County representation was now, and whether the PDs had vetoed them.

Ó Caoláin said the rejection by Fine Gael and Labour of the Taoiseach's proposal to provide for participation of Six-County MPs in a Committee of the whole Dáil "exposes these deeply partitionist parties for what they are. They want to keep the Oireachtas as a cold house for northern nationalists."

He urged Ahern to proceed with the plan.

Ó Caoláin said: "Before the ink was dry on the Taoiseach's letter to them, Fine Gael and the Labour Party rejected the proposal to provide for participation of Six-County MPs in a Committee of the whole Dáil. These deeply partitionist parties have been exposed for what they are. It also exposes the hollowness of their oft-repeated praise of the SDLP. They want to slam the door in the face of that party's MPs so that Sinn Féin can also be kept out. And of course this proposal would provide for all MPs to participate, including unionists, but Fine Gael and Labour want to rule out any possibility of such participation as well.

"Above all, the stance taken by the leaderships of Fine Gael and the Labour Party is an insult to the nationalist community in the Six Counties. They want to keep the Oireachtas as a 'cold house' for northern nationalists.

"I have written to the Taoiseach seeking clarification on the status of his proposal now, in particular if it is the case that the Progressive Democrats have vetoed it. In his letter to the party leaders the Taoiseach stated his intention to invite Six-County MPs to participate in a Committee of the whole Dáil. The agreement of other parties was sought on the format and agenda of such meetings. Therefore the Taoiseach should proceed with his proposal.

"Serious questions have been raised for the rank-and-file membership of Fianna Fáil, Fine Gael and Labour. Are Fianna Fáil members content to see Michael McDowell and Mary Harney vetoing this modest and reasonable proposal? Are the rank-and-file members of Fine Gael — the 'United Ireland Party' and Labour, the party that claims the mantle of James Connolly, content to allow their leaders to turn them into fully fledged unionist parties?"