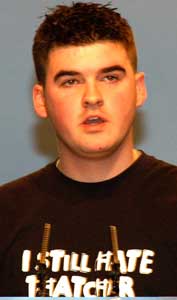 Ógra Shinn Féin - re-organised, on the move and growing

In 2004 Ógra Shinn Féin was restructured nationally and regionally. A new National Organiser and Cúige Organisers were appointed. With structures and activists in place the aim was simple -- re-organise Ógra Shinn Féin, ensuring the recruitment of young, radical, committed republicans through our increased activism, and presence on the ground.

We are on the road to success. Our activity has increased. Our profile has increased and through this, our activist base has grown. With this has come an increase in harassment from state forces, with the arrests of a number of activists on trumped up charges. Aimed at preventing further growth this has merely united us and made us stronger.

Ógra has a revitalised activism, new structure, more communication and co-ordination. Some old groups have been re-activated. Most areas have seen membership growth and some areas like North Antrim, South Antrim, East Tyrone, South Down, East Derry, Coleraine, Jordanstown and other parts of West Tyrone have seen the establishment of new groups over the past year. There are now 19 Ógra groups across the Six Counties.

There is now a fully operating Six-County officer board, with well attended Sé Chontae Ógra meetings being held every month since January 2004.

As well as using the meetings to lay out a plan of work for the coming month, we also have a training element. The meetings are used to give leadership briefings, ensuring young activists are kept informed on the struggle, so that troubling questions can be tackled and cynicism avoided.

For Ógra to be effective, activists must understand their role and set strategic objectives particular to Ógra. All Ógra activists are already members of Sinn Féin and will already be carrying out duties for them. To avoid becoming 'mini Sinn Féin', we must define our own role, our own strategic objectives, and a 'niche' in the struggle that can be tackled by Ógra.

To me Ógra has three roles — campaigning, recruitment and education. Following the IRA's decision to formally call an end to the armed campaign, there must be a 'cutting edge' to the struggle, and I believe with a little more effort and assistance Ógra can become that 'cutting edge!'

If we use direct action protests and street politics; If we continue to find new alternate ways of bringing mass support for our campaigns and objectives; If we learn from the Basque youth movement Segi and other revolutionary movements throughout the world, then I believe in the time ahead we can make this a reality.

We are the campaigning body of the movement and so if any protest or campaign is happening in your local area, Ógra, where appropriate, should be taking the lead. Through this we will recruit, because recruitment is achieved through action.

When we recruit it is up to us to ensure that activists are with us for the long haul and we will do this through education. We must make use of our education programme, but also through education on the ground, show activists the reality of living in Ardoyne during 12 July, the reality of British occupation at the Omagh Demilitarisation Weekend, or bringing activists to the Basque Country to show the oppression but also the strength of the youth movement Segi.

In the last year we have left our mark in the streets and countryside across the North. Visits to our imprisoned comrades in Castlerea, Colombia 3 Sponsored Walks, Green Post Box campaign, campaigns on President For All and Youth 4 Truth, Demilitarisation Weekends in East Derry, South Down and West Tyrone, Youth in Struggle events in Belfast, anti-collusion rooftop protest in Strabane, Collusion exhibition in Queen's University, Long Kesh escape lecture North Antrim, National Congress in Derry, the Free Seán Kelly Protest in Coalisland or the mobilisation to the Basque Country, are but an indication of the growth of Ógra.

In the remaining months of Sinn Féin's 100th anniversary, we must build upon the great work that has been done. We must continue to be active, to recruit and to educate, training Ógra members to be the activists and leaders of the future. We must increase our activism, making sure we don't become a talking shop but rather a youth movement, which radicalises, republicanises, inspires and activates Ireland's youth.

Preparation must now be underway for our main activity next year -- the 25th anniversary of the 1981 Hunger Strike. We should now be developing ideas, slogans and images that will best capture the spirit of the '81 Hunger Strike.

There is a common misconception amongst young republicans today that senior activists or the leadership 'will sort it out'. Nonsense. Young people have always played an important role in the struggle. Today is no different, it must be the young activists that will effect the necessary change in society.

Without youth coming through there is no struggle. The youth must not leave the work up to others. We must take leadership and influence decisions.

Being a republican isn't about expressing your views in a pub, nor is it about shouting 'Up the Ra'. It is about getting stuck in, getting active and advancing the struggle. Do all you can — canvassing, protesting, community action and be sure that everything you do is advancing the struggle. Every little thing an activist does is helping to achieve our overall goal.

Sometimes activists get disillusioned and question if we're on the right path. There are some who never express these feelings and drift off without really knowing the answer to their difficulties. If you have a problem with republican strategy or with your role, express your views, let them be known. It is the courage to make these constructive criticisms that will help build future republican strategy.

Past generations of republican youth inspirationally led the movement, taking on the might of the British war machine, and affecting enough pressure to bring them to the negotiating table. Young activists took initiative and showed admirable bravery, many giving up their freedom and many giving up their lives.

We must take lead from these young activists of past generations. We must look to them for inspiration, develop ideas, and ensure that we are advancing the struggle. In the time ahead we must build a mass movement, and so every activist has a duty to bring more activists on board the Sinn Féin train. The more activists in the struggle, the quicker change will come and the quicker freedom will be won. Onwards to the Socialist Republic.