United Ireland must be more than aspiration 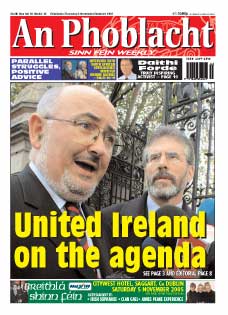 Dáil motion - "All parties should work towards Irish unity"

All parties in Leinster House should work together towards the aim of Irish unity and independence. This was the message from Sinn Féin TDs as they tabled a motion calling for the Oireachtas to prepare politically, economically, socially and culturally for Irish unification, identifying steps, including a Green Paper, which can assist a successful transition to a united Ireland.

Opening the debate on Wednesday, Sinn Féin Dáil leader Caoimhghín Ó Caoláin said: "It is an honour to present this motion on behalf of the Sinn Féin deputies. It is a motion that encapsulates the central aim of our party — but more importantly, I believe, the sincerely held objective of the vast majority of the people of Ireland. The democratic objective of the re-unification of Ireland is reflected — to one degree or another — in all political parties represented here in the Oireachtas. All the principal political parties state that Irish unity is one of their aims. But it must be more than an aspiration and an objective, however sincerely held. If we are serious and sincere we must work together towards Irish unity.

"This debate comes in the wake of the momentous decision of the IRA to end its armed campaign and to put its weapons beyond use. It confirmed what the Peace Process had established — that Irish republicans are totally committed to the peaceful and democratic way forward to our objective of Irish unity and national sovereignty.

"The immediate task before all of us is the re-instatement of the structures established under the Good Friday Agreement. That is the responsibility first and foremost of the British and Irish Governments. On the part of the DUP there can be no more possible excuses for non-engagement with Sinn Féin. The excuse of IRA weapons is no longer tenable; indeed the hollowness of that excuse as used so often in the past has been exposed since the IRA's announcement and its putting of weapons beyond use.

"Sinn Féin has tabled this motion, and we are urging the Irish Government to publish a Green Paper on Irish Unity, because we believe that the practical planning for a United Ireland should begin now."

Aengus Ó Snodaigh TD pointed to a future United Ireland whose foundation stones would be equality and human rights:

"Sinn Féin's vision of a United Ireland is one of a Republic based on the recognition that peace, security and the democratic life of the nation are dependent on human rights -- civil, political, economic and social rights. For Sinn Féin 'freedom' is nothing if it does not embrace these rights. Parity of esteem, equality of treatment and full human rights must be guaranteed for all. Ireland has the wealth and resources to create a rights-based society, all that is needed is the collective political will to achieve it. And I am confident that more and more individuals, political parties and civil society groups will join with Sinn Féin to collectively pursue this agenda as the benefits to be accrued by all on this island are demonstrated."

Martin Ferris TD focused on a recent speech by Labour Party leader Pat Rabbitte which urged that the issue of Irish unity should not be pursued:

"In his speech here on September 28, Deputy Rabbitte spoke about the Six Counties as though it was some exotic country on the other side of the world, and its inhabitants a strange band of beings whose actions and motivations are a constant puzzle to all of us 'down here'.

"Deputy Rabbitte and others contend that the solution to their problems is to engineer a permanent settlement in which the Six Counties remain forever under British sovereignty. Republicans have never made any secret of the fact that we do not regard a devolved administration as the final settlement. What we have done, and along with others who do not include Deputy Rabbitte's party, is bring about a situation in which advocates of Irish unity and defenders of the union can argue their respective positions in something approaching a normal political environment."

The debate continues as An Phoblacht goes to press.

Reaffirming its support for the Good Friday Agreement as endorsed in referendums by the people of Ireland North and South;

Recognising the political progress brought about by the Peace Process and the Agreement, benefiting all the people of Ireland;

Promote all-Ireland policies and strategies, benefiting all parts of the island;

Actively seek to persuade unionists, through dialogue, of the advantages of Irish unification for all the people who share this island, in their diversity;

Prepare politically, economically, socially and culturally for Irish unification, identifying steps and measures, including a Green Paper, which can assist a successful transition to a united Ireland.