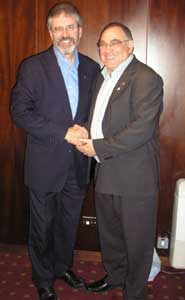 On his visit to the Six Counties last week, South African Intelligence Minister Ronnie Kasrils was interviewed for An Phoblacht. In the unlikely surroundings of Parliament Buildings, Stormont, the former freedom fighter spoke candidly to Jim McVeigh and Daniel Jack of his days in the underground MK, military operations against the Apartheid regime, the place of negotiations in a revolutionary struggle and the challenges of building a new society in South Africa.

An Phoblacht: You were an active member of MK involved in fighting an armed struggle. Could you tell us a little bit about that?

Ronnie Kasrils: The year 1960 was a watershed for South Africa and for me personally. As a 20-year-old I was into rebel poetry and music but I had not got much of a political consciousness, although I deeply hated the colour bar. I had many friendships male and female. We attended parties and gatherings together. All this was quite illegal.

When the Sharpeville massacre took place, this really shook me. Innocent people shot down simply protesting against injustice caused me to contact the ANC. I was literally thrown in at the deep end of things. I am sure that like your movement a fresh face was a great asset being unknown to the police, without a record. I began running secret missions, getting safe houses, driving people about who were on the run and so forth, becoming a full-time activist.

Events moved rapidly and in 1961 our political leadership took an historic decision. The non-violent nature of our struggle had to change with the mounting repression from the Apartheid regime. They declared a state of emergency and the ANC was banned. It was now only possible to move forward with arms in hand. I was recruited into MK and was appointed to the regional command of Durban in the Natal Province. This may sound familiar to you both. We began recruiting, training and experimentation with homemade explosives. All this was in preparation for the commencement of our armed struggle.

On 16 December 1961 we launched our acts of sabotage against the symbols of the regime like the Pass Offices, somewhat like the customs posts during the IRA border campaign. Again this may sound familiar to you. Some of the bombs went off and some did not but what we were sure about was that they made a massive impact. We had reached the stage in our struggle where we had two choices to either submit or fight. We chose to fight.

Could you share with us some of the highs and lows of your struggle?

This is hard as we had almost 30 years of armed struggle. The opening three years of the sabotage campaign were certainly important and one operation sticks in mind as it was devised by my dear wife. It was brilliant in its simplicity but had a massive impact on our operational capability.

Previously we had been crushing crystals and mixing powders for explosives, which were not having much effect. What we needed was commercial explosives. My wife had discovered that there was a cache of explosives situated at a construction company just outside Durban. From here we liberated a tonne of high explosives such as gelignite and dynamite. This was a fenced off site and we thought about bolt and wire cutters but my wife simply checked the number on the padlock and shopped around until she found an identical one and using the key we just walked in.

We were able to provide explosives for all of South Africa and soon could blow up railways and power-lines that we could not do with our homemade devices. A coup for us was knocking out the grid system for the Durban area. This is a busy dockland/port and we plunged the city into darkness. What usually happened after an explosion was the Special Branch would carry out raids within 15 minutes. However, we began to set the timers for a longer period giving us plenty of time to get back home where we waited for the explosions to go off. The lights then went out and we ran outside and had a look down at our target. We danced a quick, jubilant jig before returning to the house to wait on the inevitable raid by the Special Branch.

What was probably the biggest low for me was when our High Command — Nelson Mandela, Walter Sisulu, Govan Mbeki, Raymond Mhlaba, Elias Motsoaledi, Andrew Mlangeni, Ahmed Kathrada, Denis Goldberg and Arthur Goldreich, were all arrested at a house in Rivonia. This was a massive blow and set our struggle back with many arrests following all over the country. Our network was greatly disrupted. My wife was arrested but soon escaped from police custody. I managed to evade arrest but had to go on-the-run. I was now based in Dar es Salaam moving back and forth into the country and helping to rebuild the movement.

It must have been a difficult transition from armed struggle to negotiation and political struggle. What advice would you have for Irish republicans at this stage?

My advice is positive. It is possible to do this. It requires clear-minded, sober thoughts and needs an understanding of the political process. With armed struggle I believe there are two types. Either one with a political starting point or one with an armed beginning. When people are oppressed and colonised this can be defensive, defending rights and lands such as in Mexico and to a certain extent the 26 July Movement in Cuba.

In Ireland your struggle was responsive to an outside conqueror. This evoked an armed response for decades, for centuries, but there soon emerges the need to have a political voice to explain what we are doing.

In many respects the ANC was the reverse of that. We mobilised politically but were outlawed and had to resort to armed struggle. This was an advantage and when the time was right for political struggle again it was easier to resort back. I am impressed that Sinn Féin has come to this point and has persuaded the IRA to follow a political path. The correct political leadership is important. Those who used the gun did so for political purposes and it had its use. As chief of MK Intelligence I was initially sceptical about the negotiations. I felt the time was not right, that the armed struggle was gaining the upper hand. But we debated this in a disciplined and mature fashion and we came to the collective conclusion that it was time to resort back to the political struggle. But I still miss my AK47, I had it beside my bed every night for decades and I sobbed when I had to hand it back!

Republicans now view negotiations as a site of struggle. What advice can you give us as the South African Minister for Intelligence Services and can you tell us a bit about what you do and how you came into this job?

Initially I was Vice Minister for defence and this was a very difficult job, as we had to deal with all the Apartheid Generals and their personnel. We also had to amalgamate the MK fighters into the defence forces. This was very difficult to do as a lot of the Apartheid personnel were deeply entrenched. They were securocrats but some just wanted a job. Others we had to give a golden handshake or a golden parachute to let them bail and this created problems as we could not give these pensions to MK fighters. But it was the lesser of two evils and we explained and debated this. It was a means of keeping them under control. As we were paying their pensions we could stop it if they began to misbehave. Their attitudes changed quickly when they seen the writing on the wall. Some were careerists and wanted to stay and we managed to keep them and they have proved to be useful assets. We still have problems and I have to salute the MK fighters. They amalgamated well but we still have an urgent need for professionalism and the need for a non-partisan demeanour. We need to create a law-based society with no abuses of power. We have to act even-handedly. We liberated all South Africans from Apartheid, so a partisan political agenda within the intelligence services or the police would be wrong and counter productive. We are working hard to ensure that our state services are professional and impartial.

You are a member of the Communist Party, a radical individual. How have you managed the challenges of building a nation and redistributing the wealth?

When I was younger I used to have a vision of me, like Che Guevara with the beret and the AK47 entering Johannesburg in jubilant procession after a great revolutionary victory. But history changed. We had to change and look at how we would develop South Africa. We are in a unipolar world and we have to be involved in the world economy. Our economy is a mixed economy, and you must remember that the options of choosing a socialist model, nationalising industries etc is not open to us.

We have to be real but yes keep our principles — build progressive alliances and strategic partners as the problems facing the world cannot be resolved without unity and solidarity.

I find it really refreshing to meet people like you guys. This is this process in action. And indeed some of the younger members of my delegation have found it amazing that a bunch of white guys have such a revolutionary spirit and solidarity and enthusiasm for our people such as was displayed last night at the rally.

Could you tell us a bit about the Truth and Reconciliation process as it may have relevance for our people who have been murdered by state forces and have been victims of collusion?

South Africans sympathise with your people. We have suffered at the hands of the same evil. When we began the Truth and Reconciliation Commission we found it extremely difficult to get information. I marched into the headquarters of military intelligence but they were prepared and had got rid of most of the information up the chimney and had wiped most of the computers. I insisted on getting files open and on getting passwords. A lot of this was useless. I typed in Joe Slovo's name and got 800 pages of speeches and quotes from him but nothing else, nothing about any of the operations against him. They had cleared up after themselves. We tried the concept of indemnity where people who testified to the TRC would not be charged. Many appeared and apologised and this gave some families closure but others were not happy that the murderers of their loved ones had got off without prison sentences but overall it was a positive process.

My press aide that is here with me, his brother was murdered by the Special Branch. He was arrested and brought for interrogation and after four days he was thrown out the of the tenth floor window. The Branch then concocted a whole big story saying that he had done it himself in the depths of despair but the inquest showed that he was covered in cigarette burns and that he had been badly abused, covered in bruises. When it came to the TRC the Branchmen involved refused to attend. They were tracked down by investigative journalists and refused to give interviews. They were physical wrecks, skulking behind barred doors, living a nightmare, ashamed and worried about what they had done. They can't move on. They are trapped by the past whereas we have been able to move on.

Maybe this story will help but I want to wish you all the best in your future endeavours. Irish republicans have been and are an inspiration the world over. Your day is coming and we look forward to celebrating your liberation with you all.