Adams to raise issue of peace funding with Blair 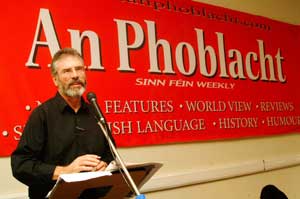 Gerry Adams speaking at the An Phoblacht relaunch

Sinn Féin President Gerry Adams travelled to Brussels on Wednesday 5 October for a series of public and private engagements to update members of the European Parliament on recent developments in the Irish Peace Process.

Speaking afterwards Gerry Adams said: "I outlined to Commissioner Hübner Sinn Féin's very strong view that the EU should enhance and support the Peace Process by making available a Peace III fund, to build on the positive work of Peace I, Peace II and the Peace II extension. I believe the Commissioner is very open to this and is supportive of a Peace III fund but it requires the British and Irish Governments, but especially the Britis