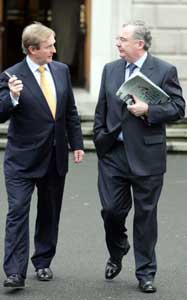 Enda Kenny and Pat Rabbitt: The opposition Pinky and Perky!

We are witnessing the origins of another fraud. There is still time; we can nip it in the bud. Enda and Pat are promising an alternative government. Opinion polls are suggesting that this ruse is getting through to the, admittedly weary, potential electorate.

Their ruse works on several levels. Both Fine Gael and Labour have been flagging in recent years. Even the Coup d'Etat by Democratic Left entryists did not prevent Labour's stagnation. The Blueshirts, while maintaining their conservative core, have resorted to US-style presidential packaging to lead the charge against their corporate cousins in Fianna Fáil and the PD's.

And here's the rub. All of these parties believe that we live in an 'economy'. And its not just any economy -- it's a Celtic Tiger economy — a successful economy. This political establishment and its fellow travellers in the media accept the fact that in this 'economy' greed is elevated to a virtue and that increasingly the purpose education system is to facilitate employers and not to broaden our minds.

Does the proposed alternative government believe, as this one does, that the quality of medical treatment one receives depends on your income? Are they not for Public/Private Partnerships like the current crop?

Of course, there is a danger that we could fall into the trap of believing that political debate has to be within the boundaries acceptable to our political enemies -- those defending the status quo. Surely it has to be Berlin or Boston? Some within Fianna Fáil, Fine Gael or Labour may lean marginally towards Berlin. We all know where the PD's face. Though strangely silent on Bush's handling of the Hurricane Katrina debacle and the resulting exposé of inherent US inequality, they are at least honest enough to admit that inequality is a good thing for the system they defend.

The economic platform promoted by the alternative government, no more than the current one, needs inequality too. For they are just as neo-liberal and work within the same 'accepted' boundaries and they should not be allowed to create the impression that they are in any way different.

There are other models. Neither Boston nor Berlin. There's the Cuban and Venezuelan models, for example. Are we at least allowed to discuss the approach taken by President Chavez to, say, Natural Resources? Healthcare perhaps. We have seen how Norway has protected the income received from its natural resources and there are many examples of people-centred socialist policies throughout Scandinavia that hold up well to scrutiny.

We have to be careful about these 'acceptable' boundaries of political and economic discourse. Given that any combination of the aforementioned parties operate within this paradigm, coalition with them would depend on acceptance of this narrow neo-liberalism. Changing the paradigm is a more laudable and honest objective. The world has indeed moved on. The Soviet bloc is now well over a decade dead and the inevitable move to the right, the creation and fostering of more inequality, Regan, Bush x 2 and Blair etc need to be transcended.

We could accept 10-15% of the popular vote in the 26 Counties, with the prospect of some role in government or supporting government, but we won't be playing the part we could in changing the political debate in favour of 21st Century socialism. Of course, given the strength of our political enemies, their corporate and media friends, we need to prepare for a longer haul. However, in the process of that haul lies the scope for building and advocating a real alternative.

That it why we need to expose the Fine Gael/Labour ruse for what it is. We should expose it aggressively whilst advocating truly democratic and participatory alternatives. Remember Tweedle Dum and Tweedle Dee. We need to ensure that the electorate understands that it does not matter which combination holds sway. It's a mantra that we should adopt and repeat. Lets start now.