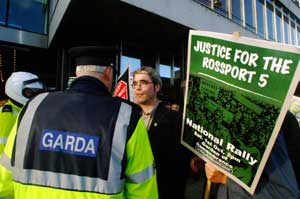 As THE Rossport 5 spent their 86th day in jail, the issue of their imprisonment and the wider oil and gas giveaway scandal continues to attract increasing public interest.

Following the outcome of the Norwegian General Election and the likely inclusion of a coalition partner in the next government committed to pulling Statoil out of their partnership with Shell, the families of the Rossport 5 are due to travel to Norway to press the issue.

Meanwhile marches, rallies protests and public meetings continue around Ireland with mobilisations over the past week in Dublin, Cork, Leitrim, Galway.

The Norwegian Labour Party is expected form the next government in coalition with the Socialist Left Party and the Greens. The Socialist Left Party is committed to pulling Statoil out of its consortium with Shell. Currently the Norwegian state owns 70% of Statoil and in turn Statoil has 37% ownership of the consortium of the Corrib Gas field (the remainder 45% by Shell and 18% by Marathon). The main focus of the trip will be to highlight the health and safety and environmental implications of the Corrib operation as well as the imprisonment of the five men.

Meanwhile, across Dublin Shell and Statoil stations continue to be picketed on a weekly basis.

On Friday 16 September, the wives of the five men — Maureen McGrath, Caitlín Ní Sheighin, Mary Corduff, Maureen McGrath and Aggie Philbin — held a protest outside Cloverhill Prison to mark the 80th day of the incarceration of their husbands. As with other protests and rallies this attracted considerable support from passing members of the public. Sinn Féin MEP Bairbre de Brúin was present and visited the prisoners. "I have raised the matter with the European Parliament and with the outgoing Norwegian Government through their ambassador. I believe that if the political will exists then this issue can be resolved amicably. Meanwhile, the Rossport 5 must face their 80th night in prison, in the knowledge that they have the Irish people on their side but not the Dublin Government. I want to express my solidarity with those who have been imprisoned and call for their immediate release," she said.

On Saturday 17 September a march and rally in Cork called for the release of the Rossport 5. Several hundred people assembled at the City Library in Grand Parade and marched to Bishop Lucey Park. Speaking to An Phoblacht, Sinn Féin Councillor Jonathan O'Brien said: "This was one of the more successful marches and this issue has grabbed the public imagination. It has encouraged more people to take an interest in politics in general. It is incumbent upon Shell and the government to secure the release of the Rossport 5."

A large public meeting took place in the Sacre Coeur Hotel in Salthill, Galway on Monday 19 September. Speakers included Bríd Ní Sheighin (daughter of Micheál O' Seighin), Dr Mark Garavan, spokesperson for the Shell-to-Sea campaign, Sister Majella McCarron of Ogoni Solidarity Ireland and Donnacha O'Connell, a Law lecturer, at NUI Galway. Other family members from Rossport were in attendance. A major public meeting on the issue of the Rossport 5 is planned to take place today in Ennis County Clare.

Shannon, County Clare hosted a Municipal Council Meeting over three days on 14, 15 and 16 September involving town councillors from all over Ireland with Minister for the Environment Dick Roche in attendance. Members of Clare Shell-to-Sea campaign made representations at the meeting.

The two campaigners were invited by Joe Reilly and Martina Anderson of Sinn Féin and highlighted the Rossport 5 issue to the delegates. Following Minister Roche's speech, they asked a question from the floor but he walked away without addressing the question. Niall Hartnett from Clare Shell to Sea said "we demand that pressure be put by the Irish government for Shell to lift the injunction".

Last week also saw BBC's Newsnight programme feature a damning exposé on Shell's practices on the Russian island of Sakhalin. Their activities not only threaten to pollute a large part of Sakhalin but also endanger the existence of the Western Grey Whale species. Requests by the World Wildlife Fund for Shell to delay their work pending further study has fallen on deaf ears. Furthermore Shell has not made any contingency safety plans in relation to their operations in a geologically volatile part of the world where earthquakes are commonplace.