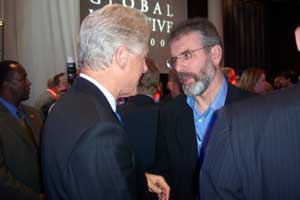 During his US visit last week Gerry Adams travelled to New York where he was a guest speaker at the inaugural meeting of the Clinton Global Initiative, organised by former US President Bill Clinton. This coincides with and compliments the Millennium Summit of the UN General Assembly.

There were over 700 participants at this ambitious, and at $15,000 per person, expensive initiative designed to bring together a wide range of 'movers and shakers' to discuss matters of global concern.

According to the organisers the conference was action-orientated‚ and results driven and they weren't joking. The pressure inside on participants to make commitments to do something, deliver something, on one or more of these issues was as intense as the 80-plus degrees and high humidity on the streets outside.

And it worked. With commitments totalling $1.25 billion it must rank among the greatest fundraising conferences of its type ever held and must surely have surpassed even the expectations of its organisers.

Sinn Féin President Gerry Adams arrived in New York on the Thursday evening for the opening. He had been invited to participate as a speaker by former President Clinton. His workshop — 'Defusing Religious Conflict' was held on Friday and chaired by Ms Preeta D Bansal, Commissioner and Past Chair of the US Commission on International Religious Freedom.

On the panel with Gerry Adams was Gareth Evans, President of the International Crisis Group and Dr Ghassan Salame a former Lebanese Minister and former UN Senior Political Advisor in Iraq. In the packed audience was former UUP leader David Trimble.

Adams dismissed the view that the conflict in Ireland was religious, while accepting that there are sectarian elements to it. Consequently, he argued the importance of looking beyond the labels and the soundbite and getting to and identifying the core issues at the heart of conflicts. A failure to do this means a failure to find real solutions. He stressed the importance of dialogue in resolving conflict; of treating people with respect and as equals, and the role of poverty in exacerbating the conditions for conflict. The workshop sessions worked well and the feedback from all the audiences was well informed and constructive.

The plenary sessions also tackled issues as diverse as genocide and climate change. The President of the Republic of Rwanda Paul Kagame spoke of the horrors of genocide in his own country and that of Darfur and brought home to a hushed audience the human cost of conflict and in particular the terrible impact war has on women and children.

In a separate debate at the end of the three-day conference the UN Secretary General Kofi Annan returned to this issue and gave a bleak insight into the recent inability of the UN to introduce the wide ranging reforms that the institution needs and the problems it faces in intervening in conflicts. It isn't just about not having a standing army of its own, and having to rely on the good will of other nations to provide troops. In Darfur they didn't have enough fuel for planes to take Rwandan troops to the effected area or the necessary resources to support those that were there.

The debate on climate change sparked the audience. In particular an enthused Al Gore achieved the only standing ovation of the conference — apart from that given to entertainer Tony Bennett — with an impassioned plea to nations and citizens to tackle the global emergency‚ presented by global warming and severe weather. Hurricane Katrina and the failure of the emergency services in the United States to protect citizens and provide for their care and safety underpinned much of the debate.

While it is usually difficult to judge the relative worth of conferences of this kind, the emphasis of the Clinton Global Initiative on results and commitments meant that it succeeded in delivering big in terms of money donated directly to causes and pledges for scores of projects in the time ahead. One news report claimed that failure by a participant to deliver on a commitment would see no further invite from former President Clinton to future events, an additional piece of leverage which will undoubtedly see most of the billion plus promised delivered in the time ahead.