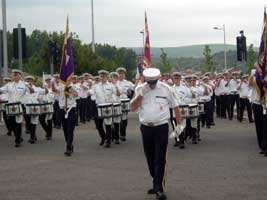 For over a week unionist politicians, commentators and the media have sought to explain away unionist violence in terms of a series of underlying grievances. This journey of the imagination has been embarked upon as a means of overcoming a number of difficulties arising out of the widely publicised scenes of sectarian unionist mobs rampaging through the streets.

Re-routing the Orange Order away from nationalist residential areas can only represent a threat to unionist culture and heritage if that culture is based solely upon supremacist anti-Catholic sectarianism, but such an analysis unionists deny.

The idea that re-routing a march 125 yards represents a real threat to unionist culture is so utterly unbelievable and the scenes of unionist violence that followed so disproportional, that it threatened to expose them to ridicule. Using this fig leaf to undermine political progress and the peace would soon wear thin so an alternative explanation for the violence was urgently needed.

UUP leader Reg Empey was one of the first to set the tone. The source of unionist violence was not just the Whiterock parade he argued, but was "much more deep-seated than many are perhaps prepared to accept". Unionist communities were suffering "more deprivation, more educational under-achievement and greater unemployment than before", said Empey.

Empey might have led the charge but there were plenty eager to follow. Not least of these was Dublin Foreign Minister Dermot Ahern. During an interview with RTÉ radio Ahern reinforced unionist claims that recent violence had been caused by economic deprivation. Ahern was prepared to go even further than Reg Empey by stating that somehow unionists were worse off than nationalists. "The further you get down to the core issues, issues of alienation, endemic unemployment in loyalist areas, which is not as clear cut as in nationalist areas where perhaps the ability to advance individuals because of education has not been the same in loyalist areas," he said.

And he went on: "I think the two governments, particularly from the economic point of view, have to work harder in order that the benefits of the Peace Process from an economic and social point of view are spread evenly over the North of Ireland."

Ahern's assertion flies in the face of a raft of recently published official British Government statistics and reports that have consistently exposed higher and more widespread levels of economic deprivation within nationalists areas across the North.

Despite plenty of evidence to the contrary, the media maintained this economic justification argument. "While some republican districts suffer the highest levels of deprivation in Western Europe, Protestant areas are also increasingly deprived. Over the past decade, once thriving areas like the Lower Shankill in Belfast, have become virtual ghost towns, writes Colm Heatley of the Sunday Business Post.

No mention of years of unionist paramilitary feuding on the Shankill that forced many families to flee or the upward mobility that allowed many Protestant families to move to wealthier suburbs. But the fact that decline in the Shankill has more to do with dynamics within the unionist community is a less expedient argument for rejectionist unionism than peddling the myth that nationalists are somehow getting it all.

And the myths are rife. "The British Government has ordered the police not to touch Catholics," Jimmy Creighton a community worker in the Shankill told the media.

Hilariously, for PUP member Jim McDonald it was all a matter of parking tickets. "There is a great deal of discontent over parking tickets and a general feeling that republicans are being favoured by the PSNI traffic branch," reported Liam Clarke of the Sunday Times.

"Go and look up the Falls and the Springfield Road," says McDonald. "The cars are parked up all over the place, but the police do nothing about it." He also claims a series of local burglaries have been ignored because the culprits were not nationalists.

The DUP's Nigel Dodds pointed to political rather than economic motivations. "The sense of deep grievance at the injustice suffered by the unionist people is palpable on the streets, the catalyst for recent events has been the issue of Orange parades. But it would be highly reckless of the British Government to pretend that such issues such as the Seán Kelly release, the disbandment of the RIR Home Battalions, the obscene haste to demolish watchtowers, impending legislation on on-the-runs and other such issues were not at the heart of unionist outrage," said Dodds.

"The unionist community has no confidence in the political process," said DUP leader Ian Paisley emerging from a meeting with British Secretary of State Peter Hain. "They have seen that the approach of the [British] government has not been even handed. There will be no political progress whatsoever until the government is seen to treat unionists with equality and respect," said Paisley.

"Is it any wonder that unionists are so frustrated and angry?" asked the DUP's Willie McCrea. "It is time the government faced up to the climate of appeasement they have created. When was the last time the government attempted to address issues of discrimination, deprivation and inequality in the unionist community.

"After a summer when unionist culture has been suppressed, the destruction of security, the lack of balance in public appointments, the release of IRA murderers and the uncovering of secret plans to put terrorists into the police it is no wonder that confidence within the unionist community is at a low ebb," said McCrea.

And in a way David Ervine is correct, perception can be everything. When the ordinary person on the Shankill tells the media that republicans are getting everything and nationalists are taking their houses and jobs they're not liars. It is truly what they believe. And how could they believe otherwise when their political leaders constantly peddle such nonsense to secure their own anti-Good Friday Agreement agenda?

As Sinn Féin has repeatedly pointed out what we are witnessing is not a failure in unionist leadership but the consequences of negative leadership. Sinn Féin's Martin McGuinness has pointed out that the recent historic initiative by the IRA has "created an unprecedented sense of optimism and expectation that renewed progress can be made towards a lasting peace. Except that is within the leadership of unionism. Their response has been negative, cynical and backward looking. Last week this negativity manifested itself in widespread violence orchestrated by unionist paramilitaries clearly designed to undermine progress and throw the Peace Process into crisis.

"Disgracefully unionist leaders have compounded this dangerous situation with inflammatory and totally inaccurate statements. In particular they have made wholly unfounded claims that the current loyalist violence stems from inequality and growing disadvantage in loyalist areas. In fact all of the evidence shows that nationalists continue to suffer the effects of ingrained and institutionalised inequality and disadvantage.

"The reality is that the unease and instability in unionist communities stems from a political vacuum created by unionist politicians and now filled by unionist paramilitary violence", said McGuinness.