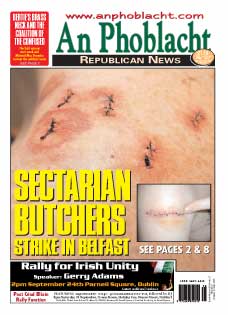 A 29-year-old Belfast nationalist stabbed six times in a frenzied attack by a unionist gang last week, believes he is lucky to be alive. In the attack, on Brompton Park, Ardoyne on Friday 16 September the man received up to six wounds in his left shoulder and right upper arm after at least two men plunged knives into him. A third man, the driver of the car, was armed with a machete but as he left the vehicle to join the attack the baseball cap he was using as a disguise fell off and he leapt back into the driver's seat. This, and the fact that the victim landed a powerful blow on one of his assailants may have saved his life.

The incident began as the man was walking along Brompton Park. He was approached by a young woman in her early 20s who disembarked from a silver Vectra car and asked him for directions. As the man spoke to her either she or one of her accomplices pulled the hood of his sweat shirt over his head and tried to drag him down. The assailants then plunged their knives into him, although at the time the man only thought he was being punched. During the attack the young woman kept shouting, "slice the Fenian bastard".

The man struggled against the knife gang and struck one of them a hefty blow on the nose. At this point the gang got back into their car and drove off in the direction of Crumlin Road while the wounded nationalist went to hospital where he received over 20 stitches in his six wounds.

Speaking to An Phoblacht the young victim said that he was told afterwards that the car, which had blacked out windows, was spotted driving around the district and that people thought it was an undercover PSNI vehicle.

Sinn Féin Councillor Margaret McClenaghan said people in Ardoyne are now worried the attack which is a carbon copy of one in August when a young man was attacked by a knife gang and nearly had two fingers severed, may herald a series of 'Shankill Butcher type attacks'.

Meanwhile, the man attacked complained about the attitude of the PSNI. The PSNI told him they couldn't pursue his attackers as they hadn't the personnel to carry out a follow up operation. However, the victim said that when they came to his home to take a statement they noticed that his car wasn't taxed and left four Land Rovers, with a crew of three in each, standing guard over the car until a tow truck came to take it away. The PSNI also refused to take a blood sample from his hand for DNA testing which he says was covered in blood from striking his attacker.

The man has previously been threatened by unionist paramilitaries. In 2001 a bullet, along with a written threat was delivered to his girlfriend's home.

The man now says he will be seeing his solicitor with a view to lodging a complaint with the Police Ombudsmann's office.

A blast-bomb attack on the home two pensioners in Upper Bennett Street in Derry's Cityside, "was an attempt to kill", said Sinn Féin councillor Patricia Logue.

The device, thrown from the unionist Fountain Estate caused severe damage to the front of the pensioner's home and a car in the attack which occurred on Friday 16 September. A second blast bomb which was reported to the PSNI was later declared a hoax.

Patricia Logue criticised the PSNI after it emerged they failed to notice, retrieve or remove as evidence a large piece of shrapnel from the windowsill of one of the rooms in the house.

"It is a disgrace that vital evidence was ignored once again by the PSNI. It is time the PSNI started to take unionist attacks seriously."

Logue went on to criticise the unionist paramilitary gang, who were behind the attack. "Nationalist community workers had been involved in efforts to halt the sectarian trouble at the Fountain Estate/Bishop Street interface and had people on the streets to ensure that nationalist youths would not become involved in attacks on the Fountain. It is clear, after this attempt to kill nationalists, that unionist paramilitaries are more interested in conflict than resolving conflict."

Logue went on to say that the bomb attack was only the latest in a long line of attacks on homes in Bennett Street which are occupied mostly by pensioners.