The historical significance of 16 Moore Street 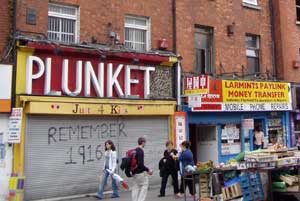 The historical significance of 16 Moore Street hasn't been forgotten

At eight o clock on Friday evening 28 April 1916, with the GPO engulfed in flames, the Provisional Government of the Irish Republic and IRA men and women retreated from the building and endeavoured to make there way to the Four Courts' Garrison. They left the GPO by the side entrance in Henry Street and made there way under constant sniper fire to Moore Lane.

When they reached Moore Street they entered number five, Dunne's Butchers, and immediately began tunnelling from one house to another. The next morning, Saturday, they quickly realised that the wounded James Connolly, who had been placed on a panel door as a makeshift stretcher would not fit through the openings they had made. The men then placed Connolly in blankets and bundled him in great agony from house to house. When they reached number 16, Plunkets, a poultry shop, they placed him upstairs in the back room.

This small room, in a small house, in a small market street, in the heart of the capital city was to be the last place where the members of Provisional Irish Government held their council of war. Pádraig Mac Piarais, Joseph Plunkett, Tom Clarke and Seán Mac Diarmada all took their places around James Connolly and discussed what to do, while Elizabeth O'Farrell, Winifred Carney and Julie Grenan tended the wounded. At the meeting a plan was put forward to rush the British barricade on Parnell Street but when Tom Clarke made his way down to the last house occupied by the IRA on Moore Street he simply shook his head and said that they would never succeed.

Tom Clarke returned to the council of war and reported what he had found and the meeting continued in hushed tones. Pádraig Mac Piarais who, through a shattered window had seen three men carrying white flags shot down, decided that they must surrender. Connolly agreed that the imminent risk of sacrificing further lives must not be tolerated. The leaders argued, wrangled and pleaded to convince themselves that the fight could be continued. But bitter reality just could not be ignored. The frail, grey-haired 58-year-old Fenian, Tom Clarke, openly wept at the final decision.

Conveying the message to the enemy was entrusted to the dauntless Elizabeth O'Farrell. With Captain O'Reillys handkerchief tied to a piece of stick, she passed through the doorway of Number 15, bravely walking down the street of the dead. The British military assisted her over the barricade and conveyed her to Tom Clarke's little shop in Parnell Street. There, General Lowe demanded that within a half an hour she must return with Pádraig Mac Piarais to the Moore Street barricade, insisting that the only terms acceptable to him was unconditional surrender. It was 2.30 when Pearse shook each Volunteer's hand in final farewell.

In his heavy military overcoat and Boer shaped hat he marched down towards the barricade, Elizabeth O'Farrell by his side. Here he was received by General Lowe, to whom he handed his sword, pistol and ammunition, also his tin canteen which contained two large onions. On the footpath, outside of Byrne's shop at the corner of Moore Street an old wooden bench was brought out from the shop, here Pearse stooped and signed the document of surrender which had been placed upon it.

Elizabeth O'Farrell agreed to their joint request to deliver the documents of surrender to the various Dublin outposts. Without speaking and with a smile he grasped her hand for the last time.

At Moore Street headquarters the Volunteers were stunned on learning the terms of the surrender. Most of them insisted on fighting to the death. But Connolly was adamant; his boys must not be burned to death.

Volunteer Séamus Devoy, nephew of the Fenian John Devoy, returned to number 16 informing them that he had made the necessary arrangements to have the Parnell Street barricade opened to receive Connolly. The rest of the men began to gather in the street. Filing up and forming ranks, with sloped arms, the first group marched off under Captain O'Reilly picking up any stragglers on the way. Next, Willie Pearse headed the main body waving his white flag. Close behind him walked Tom Clarke and towards the rear walked Seán Mac Diarmada and Joseph Plunkett, supported by his brave comrades Julia Grenan and Winifred Carney.

Leaving 16 Moore Street, the temporary headquarters of the Provisional Government, marched these weary warriors, to a prison cell or grave. They were the spark which lit the fuse that will continue to burn until Ireland is united and free.

Today Moore Street caters for a new Ireland, an Ireland where citizens of the world come to for a better way of life. Connolly, the internationalist would be proud. But in the middle of this new Ireland, an Ireland created by the vision of the men and women who held their council there, number 16 is slowly falling into ruin. Developers want to reduce it to rubble and build a shopping centre in its place. We must save 16 Moore Street.