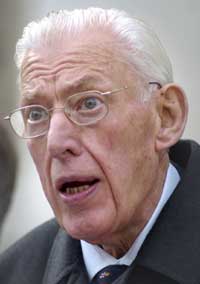 NOT SINCE Ian Paisley's Third Force mustered thousands of unionists to country hillsides in the dead of night in the 1980s to wave gun licences threateningly at nationalists living down below, or not since Ian Paisley donned a red beret to review his paramilitary Ulster Resistance gun runners in 1988, has there been such a rallying call to unionists as that issued this week by the 'Love Ulster' campaign "to oppose a united Ireland".

Backers are reported to be the Orange Order, the Royal Black Preceptory, the Apprentice Boys, and "victims' groups and some church leaders".

The cutesy-named Love Ulster campaign was launched on Monday with the landing of 200,000 free "Special Edition" copies of the Shankill Mirror at Larne by Orange Order chief Robert Saunders and unionist paramilitaries. The headline reads: "Ulster at Crisis Point."

Organisers insisted that the new unionist campaign will be peaceful but nevertheless darkly drew an analogy with the landing of guns by unionists in 1914 at Larne for Sir Edward Carson's UVF.

The News Letter reported on Monday that the Love Ulster campaign materials "have been brought by boat to Larne in a symbolic re-creation of the delivery of guns to the old UVF on the Clyde Valley in 1914". And one organiser, John McVicar of the Shankill Mirror, welcomed the gangs of UDA and UVF men who turned up in their cars to get the papers out.

We get the message.

Love me, love my B Specials

THE Love Ulster poster features a line drawing of Edward Carson with a Kenny Everett-size red hand alongside a message that parodies the World War Two anti-fascist message of Pastor Niemoller but makes it clear that its leaders want a return to the pre-1969, pre-Civil Rights domination of Unionist Party rule.

The poster's headline "Evil happens when good people do nothing." That's why good people did something and we got rid of the B Specials, the UDR and the RUC.

THE MOUTHPIECE for the cutesie-named Love Ulster campaign is the "chief researcher" for the anti-republican Families Acting for Innocent Relatives, one William Wilkinson.

If FAIR's undynamic duo are the 'brains' behind this escapade, then maybe we can rest a bit easier in our beds.

WHILE the SS Clyde Valley is the vessel most closely associated in the public mind with the landing of guns bought in Hamburg for the 80,000-strong UVF in 1914, the name of the ship from which the munitions were transferred isn't so revered.

The SS Clyde Valley appeals to unionist machismo much more than the SS Fanny.

DUP band leader Ian Paisley will be taking the salute at the South Down DUP Flute Band's annual parade in Rathfriland on Friday September 16, as honourary president.

We're sure the 70 other bands expected to take part will behave impeccably, without a unionist paramilitary symbol or tune to be seen or heard.

DUP Councillor Paul Given won the support of the Alliance Party and Reg Empey's Unionist Party for a motion giving the freedom of Lisburn to the Prison Service after he told a Lisburn City Council meeting:

"I have friends who are prison officers and they told me that their best time in the Maze was when the Provos were on hunger strike because they lived like animals, and that's what they were!"

Given says his friends "are" prison officers, so they must still be serving. Will the upstanding DUP member now volunteer the names or be questioned about which of his chums are the partisan and unprofessional guards who revelled in the tragedy of the 1981 H-Block hunger strike?

Pig in a UDA poke

FOUR UNIONIST "foot soldiers" have been given suspended sentences for their part in a UDA protection racket even though they were caught on video attacking an undercover Peeler posing as an ice cream man.

The four pleaded guilty at Belfast Court last Thursday to assault occasioning bodily harm to the Peeler and criminal damage to an ice cream van.

The UDA men struck after PC 99 drove his ice cream van into the loyalist Castlemara Estate in Carrickfergus in May 2003. Two UDA screwballs warned him that he had to "register" with the local UDA to sell ice pops and pokes. As he drove out of the estate, he was attacked by the four UDA men wielding golf clubs, batons and stones.

Two other UDA men who had allegedly planned the attack were not before the court last week when the foot soldiers — John Millar, Robert Murray, Thomas McCrea and Mark Gourley — were given suspended sentences or put on probation. McCrea had no fixed address but was still given a suspended sentence.

JOHN COONEY, the conservative religious writer with the Irish Times and Evening Herald, is assuming Papal-size delusions of power as the head of the Humbert/Michael Davitt Summer School. Cooney has barred Mayo's Independent TD Jerry Cowley from speaking on 'The Role of Independents in Today's Politics' because Cowley has publicly backed the Rossport Five's 'Shell to Sea' campaign.

Having a view on an issue, according to Cooney's letter dismissing Cowley, means that you cannot be independent -- which is a stance whose implications Cooney should really think carefully about for himself in his pretence to be an independent journalist.

GERRY FITT, the SDLP former leader who lost his seat to Gerry Adams in 1983 and who died last Friday, was described on Monday by one illustrious newspaper as "an old-fashioned, working-class socialist".

The reporter didn't explain how, as soon as he was relieved of his seat by Sinn Féin, the SDLP's most self-proclaimed, "old-fashioned, working-class socialist" managed to square his principles with taking a seat given to him by a grateful Conservative British Government among the aristocrats and landed gentry in Westminster's unelected House of Lords as Lord Fitt.

But then the paper in question was that Bolshevik bastion, the Financial Times.

THE SDLP is whingeing about Sinn Féin's topical take on a contemporary slogan with its 'Make Partition History' campaign.

SDLP Councillor Colum Eastwood has had a hissy fit for the benefit of the media over republican T-shirts bearing the slogan 'Make Partition History — Support Irish Unity.'

Twisting himself in knots trying to find something to complain about, he says: "This fundraising effort cheapens the cause of Ireland and the cause of alleviating world poverty. It is simply a disgrace."

Colum, it wouldn't really be because you've got a huff that Sinn Féin thought of it before the SDLP despite you being at university studying international politics and marketing, would it?

EVENING HERALD HACK Mick McCaffrey led what was laughingly called a "Herald Investigation" in a full-page splash last Friday in which our fearless reporter revealed that the Colombia 3 "have sneaked back [and] they're still taking cash from the public".

Leaving aside that everyone from Colombia to Coleraine knows the men are home and anyone giving money knows it's to cover costs, Mick is miffed that still: "Donations gladly accepted to Bring Them Home fund."

The "special account" of the Bring Them Home campaign remains open, a startled McCaffrey cries, after proving this by a cunning ruse of Woodward and Bernstein proportions.

"This reporter lodged the sum of €2 [£1.37] to the fund which was accepted and immediately credited to the total sum."