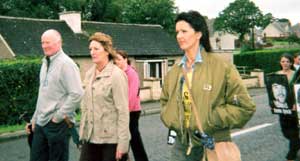 in went on to say that those who gathered to commemorate Kieran Doherty were not only there to remember the struggle of the past: "We are here because the struggle continues. Our most important task at this memorial is to renew our commitment to achieve the free, peaceful and just Ireland for which Kieran sacrificed so much."

He said that part of the struggle today was the battle of ideas and the battle for truth about the armed conflict. "The opponents of Sinn Féin are attempting to place the responsibility for 25 years of conflict on the shoulders of Irish republicans. They do so in an effort to thwart the growth of Sinn Féin.

"But the tide of Irish history is running against them. They cannot conceal the responsibility of the British Government and of successive governments in this state.

"We need to remind them in this centenary year of Sinn Féin that for most of the existence of the Six-County state and up to 1974, this party was banned outright in the Six Counties. People were interned without trial in every decade. In the 26 Counties we had censorship and repression of a legal political party. Basic demands for civil rights in the North were met with violence. Homes, communities and lives were wrecked by the British state. Was it therefore a criminal conspiracy when young people took up arms to resist all this? Any such claim is a lie — the very lie that Kieran Doherty and his comrades exposed by their heroic sacrifice.

O Caoláin went on to call for a restoration of the Good Friday Agreement and for the right of people in the Six Counties to have their elected representatives speak in the Dáil: "Fine Gael and Labour spokespersons have recently criticised this proposal. They need to explain to their own members and to the Irish people why they object to Irish citizens being represented in an Irish parliament to discuss Irish affairs. Do they believe that the place for these Irish representatives is in the British parliament in Westminster, under oath to the Queen of England? This is something that should be explained clearly by those who claim the mantle of Arthur Griffith, Michael Collins and James Connolly."