Social housing the solution to homelessness 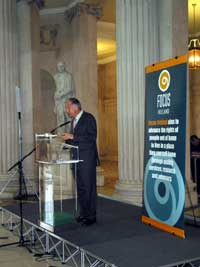 Focus Ireland, the non-governmental organisation tackling homelessness launched its annual report at Dublin's City Hall last Tuesday. Focus also announced plans to provide over 800 units of accommodation over the next five years in an effort to tackle homelessness through direct acquisition, community settlements and outreach services.

Speaking at the launch of the report, dealing with the year 2004, Focus Ireland Chief Executive Declan Jones acknowledged that progress had been made in relation to the "official homeless" insofar as the actual numbers are estimated to have fallen from 5,500 in 2002 to roughly 4,500. However, this is still twice the number from 1999.

The most recent figures available put the number of people on housing waiting lists at 48,000. There has been a policy of gradual withdrawal of central government and local authority from housing provision in recent years.

The provision of housing has increasingly been left to the private sector resulting in hyper-inflation of house prices, rents and massive debt for many young people. Lack of housing is a growing problem.

Speaking to An Phoblacht Declan Jones said that the long-term solution to alleviating the housing crisis is "long-term social housing with appropriate support services and that this is principally the government's responsibility."