Getting the message out 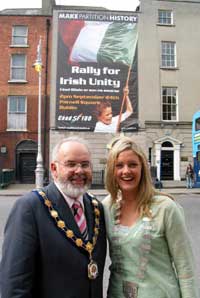 A huge banner has been unveiled in Dublin city centre to advertise the national rally for Irish unity which takes place in the city on 24 September. The event forms part of Sinn Féin's Céad Bliain anniversary celebrations.

Highlighting the demand for Irish unity across the island of Ireland, the banner was unveiled on Saturday 27 August by Mayor of Kerry Toireasa Ferris and Mayor of Dungannon and South Tyrone District Council Francie Molloy.

The building-sized banner at 58 Parnell Square, the offices of An Phoblacht, is an impressive sight, grabbing the attention of passing pedestrians and motorists alike.

Speaking at the unveiling Sinn Féin Mayor of Kerry, Toireasa Ferris said she would "encourage as wide a participation as possible in the Carnival and Rally on 24 September to show that the desire and demand for Irish unity amongst the ordinary Irish people is as strong today as it ever was".

"It is time to reject the partitionist mentality that has unfortunately been the mainstay of 26-County establishment politics for decades.

"While it is great to see GAA teams and supporters arriving in Dublin today from as far apart as Kerry and Tyrone for All-Ireland matches over the weekend we must ensure that this doesn't remain the limit of our vision of Irish unity.

"Sinn Féin wants to see all-Ireland structures developed not just in sport but in every single aspect of daily life in Ireland — political as well as social. Our goal is the re-unification of our country and an end to British jurisdiction in it. We are confident it will be realised."

Francie Molloy said: "The carnival and rally will give people, the length and breadth of Ireland, an opportunity to enjoy a fun day out while also making a very strong and determined statement in support of Irish unity."