GAMA Monaghan contract to be raised at council 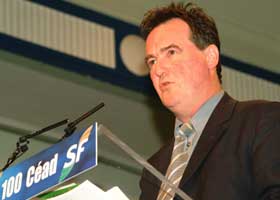 Earlier this year GAMA was exposed as paying less than €3 an hour to Turkish workers on major Irish construction projects, and had hidden tens of millions of Euros in workers' wages in the Netherlands.

Mayor of Clones and Monaghan County Councillor Pat Treanor said: "We will be questioning the County Manager next Monday when the Council resumes after the summer break. The procedures that resulted in GAMA being awarded the contract need to be subject to rigorous examination.

"We are disappointed and concerned that this company, with its disgraceful track record, including working people over 80 hours a week, should be awarded such a valuable contract.

"While we are aware of the legislation that is in place around the awarding of contracts by local authorities the reality is that GAMA was able to undercut its competitors precisely because of its illegal abuse of workers and we need to make sure this is not the case here."

Construction of the Castleblayney bypass is set to begin later this year and to be finished in 2007.